National marriage game “Catch Up with the Girl” 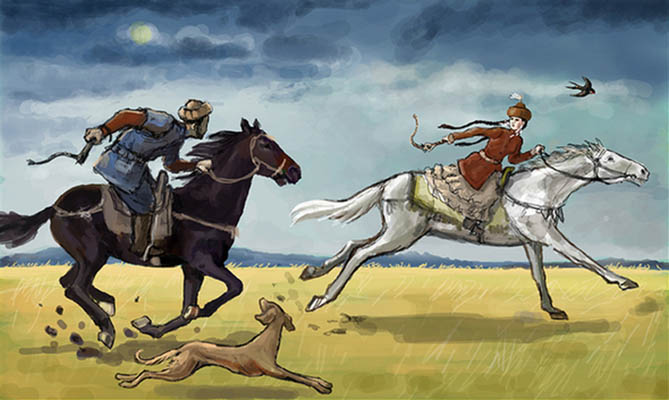 Not all traditions which remained in Kazakhstan up to now reached us in original state. For example, the national wedding game Kyz to a ku that can be translated “catch up with the girl”, underwent serious changes. The first mentions of it belong to the Middle Ages when the Kazakh men and women were completely balanced in the rights. Those years everyone could saddle a horse or does military service therefore cases when arranged to future grooms of the bride the real tests also were frequent.

Today this tradition lost many really bright elements, having turned just into one of wedding ceremonies. If the Dzhigit manages to satisfy all conditions of family of the bride, then he can take the darling in lawful wives. It is necessary to recognize that in modern Kazakhstan Kuza’s game carries a kua, rather ceremonial, than sacral sense. Despite it, many Kazakhs believe that only this way it is possible to choose really worthy groom.

Social aspect of a national game

Today there are many data allowing to see importance of similar competitions for honor of a sort or clan of the potential groom. Kuza’s scenario to a ku provides that on open space notes distances of a certain size. Acts as the termination of the competitive route meta (a rotary column). Right at the beginning the girl, sitting on a horse, hit the young man with the lash and began to move away from him on the horse.

The task of the young man consisted in need as soon as possible to catch up with the potential bride. If the Dzhigit was accompanied by good luck, and he managed to catch up with the darling to the line of turn, then in that case he could count not only on a kiss, but also on a hand and the darling’s heart. If to the finish of the first the girl came, then in that case the young man was waited by not only a shame and long months of humiliations, but also several blows by a lash from the girl whom the enthusiastic public swung on hands.

Thanks to this game of the young man not only studied with honor to accept defeat, but also to the end to fight for favor of the darling.