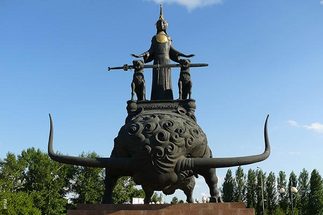 One of the main attractions of Kazakhstan can safely call its steppes, and especially in spring time. In a month April there is the real violence of paints and color – monotonous landscapes are replaced by all shades of orange, yellow, blue and red colors.

Besides steppes in Kazakhstan there is a set of other sights among which and the resort – Pine-forest which is located in a northern part of Kazakhstan between Kokshetau and Astana. The nature is simply magnificent here – there are lakes, mountains and the forest. They say that this place well influences people. Besides, in Pine-forest many boarding houses and sanatoria and also there are mineral sources and curative dirt.

Each city of Kazakhstan has the interesting sights. For example, in the city of Almaty located mountains of Zailiysky Ala Tau have a large number of green parks, the museums, theaters, cafe, night clubs and restaurants. It is possible to distinguish Panfilov’s Park from the main attractions of the southern capital of Kazakhstan – the correct rectangle of vegetation surrounding Zenkovsky Cathedral. The building it belongs to times of an imperial era, and is constructed of a tree, without use of nails. In West side of the park there are Arasansky baths where it is possible to find offices for Russian, Turkish and Finnish ban.

Astana is the capital of Kazakhstan, today represents the city developing in high gear which architectural appearance is created by means of architects with a world name.

The entertainment center of Duman in the territory of which there is an oceanarium where it is possible to observe how feed sharks is among sights of Astana. And models of sights not only Kazakhstan, but also foreign countries are stored in the Dome hall. At the beginning of Vodno-zelyony Boulevard, on the left river bank Ishim the Joint stock company-horde-residence of the president of Kazakhstan is located.

Taraz is the city founded 2000 years ago by tribes of Huns, gets in the Great silk way. For a long time, Taraz developed as the center of craft and trade. Among the architectural masterpieces which reached our times, meet also such which were included in the list of UNESCO: mausoleum Babadzha-hanum (the 10-11th centuries), and mausoleum Aisha-bibi (the 11-12th centuries).

The ashen grove – is one of unique places on the planet where the relic ash-tree meets and grows. The grasp of some trees reaches 5 meters, and the age is nearly 300 years!

One of the largest cities of the Middle Ages located on the Great Silk way is Shymkent. Among its sights there is Arystanbab, the place where since ancient times admired Saints, and “Holy site” in Sayram District.

In one of the ancient cities – Turkestan there is Hodzhi Ahmet Yasavi’s mausoleum built in the 12th century. Here guides recommend to go to the well-known Turkestan mosque and the Turkestan fair. In Tamgaly-Tas it is worth visiting surely Gallery of Rock Paintings where the Buddhist petroglyphs relating to a bronze age are represented. And in Karakol the Memorial devoted to the famous Russian scientist-traveler – to N.M. Przhevalsky and also the Russian church and the dungansky mosque deserves attention.

Majestic mountain peaks of Kyongey-Ala Tau and Zailiyskoye Alatau last from the East to the west between the Kyrgyz Lake Issyk Kul and Alma-Ata, and their height is 4 thousand m. There are picturesque valleys, the rivers and mountain glaciers. And in northern Tien Shan one of the finest peaks in the world – peak of Khan Tengri which height is 7000 meters is located, and the top has the form of a peaked pyramid. Since 2000 in August the International Khan Tengri festival which program includes marathon runnings, extreme sports competitions and ascensions on peak is annually held here.

To the east from Almaty, among the abrupt forest foothills of Kyongey-Ala Tau there are three beautiful lakes with glacial water in which water has a greenish shade. Their education was promoted by the river the Sack Seius (or Kolsay) flowing at the height of 2000 meters. Here excellent conditions for active holiday and a camping are created. And in addition many come here to fishing – the trout is found in local waters