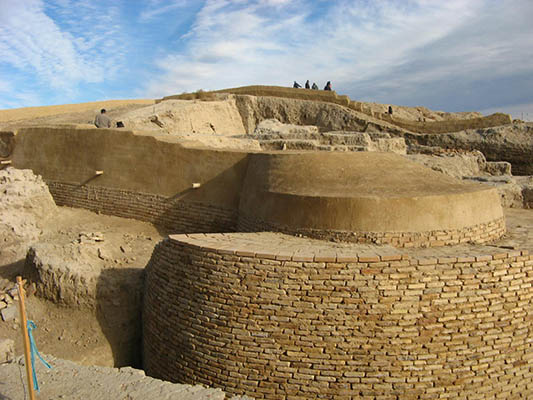 This settlement is called one of the most ancient in the territory of Central Asia. Numerous documentary sources say that during an era of the Arab dominion the ancient settlement bore a name Farab. Pioneer settlements of the nomads who came to these lands belong to the eighth century. For only several years the small village turned into well developed regional center of science, culture and the industry.

By the twelfth century Otrar became an important component of the Silk way where constantly there took place the international fairs, business meetings so further. In the city not only various workshops of handicraftsmen, but also numerous processing enterprises began to develop actively. They delivered resources, necessary for needs of the city.

Numerous archeological excavations helped to establish that the ancient settlement was divided into a set of quarters, each of which had the functional purpose:

“Highlight” of urban development was the well-known tomb which was called Arystan-baba. Numerous historical evidences say that Timur was directly involved in its construction.

Those far years each traveler heading from the East to the west or, on the contrary, by all means visited the ancient settlement Otrar. It is possible to find really fascinating descriptions of this city which was famous for various architectural constructions in the references which remained up to now:

It is possible to find data that the famous philosopher and the literary critic of that time Abu-Nasr al-Farabi was born in the ancient settlement Otrar in numerous historical documents. The translations Ancient Greek the philosopher belong to the list of its immortal works

Important military-political role of the city

By the beginning of the thirteenth century Otrar became one of the biggest settlements in the territory of Central Asia, being a part of the Empire of Horezmshakhov, being its northernmost tip. The order of the Governor, in Otrar there arrived the impressive army which had to protect northern boundaries of the state reliably. The political weight of the city was provided at the expense of the trade which was actively developing here. Speaking about development of trade relationship, it is necessary to mention one important incident.

In 1218 Genghis Khan makes the decision to direct here a big caravan with the goods which are taken out from the subdued China. In spite of the fact that the gesture had exclusively peaceful character, the lord of the city of Inlchikhan, повинуясь to Mahomed’s order, made an act, really inexcusable for East inhabitant. Breaking all laws of hospitality, the caravan sent by Genghis Khan was stopped, and ambassadors – are killed. After that all goods stolen thus went to the city of Gurgandzh.

There were no limits to Genghis Khan’s anger when he learned about the incident which occurred with its ambassadors and goods. Wishing to reward offenders according to the deserts, the governor gave the order immediately to begin a full-scale military campaign to Central Asia. In several centuries the name of this ancient settlement emerges in connection with the new military companies. This time the military commander Tamerlan glorified Otrar by successful military campaigns and gains.

Found the last rest in Otrar also the military commander Amir Timur. Shortly before the aggressive campaign to China he seriously got sick. Doctors fought for his life, but in 1405 Amir Timur died from fever in this city.

Archeologists could establish that the history Otrara contains nearly two millennia. It is considered that to the middle of the nineteenth century in the region the terrifying drought which forced locals to leave the city began. The era of a decline of Otrar also began with this time. Throughout almost century nobody remembered ruins of once powerful city. Only in the late sixties of the XX century here the archeologists who managed to find many city constructions for the first time reached:

Ruins of the ancient ancient settlement Otrar are not just archaeological monuments of the left era long ago today, and the real monument under the open sky. The ruins entered by UNESCO in the list of world cultural heritage are under close attention of the state today. Constantly there take place various works directed to restoration and preservation of the numerous artifacts capable to tell much about history of the country and region in general.

You should not forget also about religious value of the ancient settlement. In close proximity to the city of Otrar one of the most known Muslim mausoleums – Arystan-baba is located. Unfortunately, the original construction which was injured in the thirteenth century as a result of a powerful earthquake did not remain.

Today tourists have an opportunity to see only the copy constructed according to instructions of the governor of the region. In the next three centuries the copy of the destroyed mausoleum was exposed numerous reorganization and to restorations. Today in the mausoleum remind of the initial version only by miracle the remained wooden columns located on a terrace.