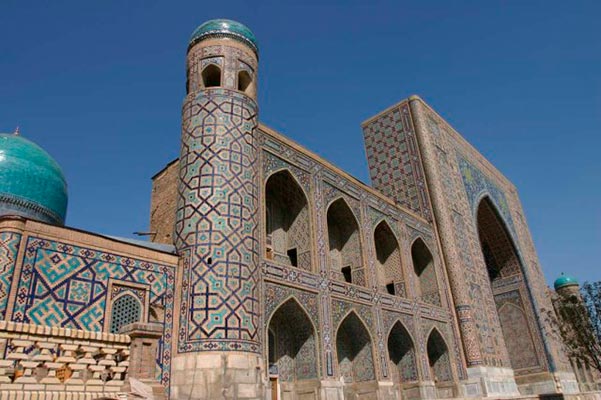 Its present appearance the Registan Square, located in Samarkand, found in the middle of the XVII century. On this site appeared Tilla-Kori Madrasa, thanks to Yalangtush Bahadur, the author of the idea of building it. Archeological artifacts made it possible to clarify that the madrasa appeared on the site of a powerful caravanserai, which had stood here for over two hundred years. The building got itsname because of its luxurious ornaments. The word “Tilla-Kori» means “guilt with gold.”

The building itself has a standard square shape, while visually filling all the space between other two madrassas. The symmetrical facade of Tillya Kori, comprising numerous geometrically regular niches and portals converted directly to the square. In the courtyard of the building, you can find multiple of khujdras (cells) where students lived.

The architects of that time did their best to make this madrassah truly unique. For example, the outer surface of the building was generously decorated with various patterns, which were, unfortunately, eventually lost. However, as a result of several restoration scientists were able to recover some ornaments.

In its west wing the madrassa has a small mosque. Many people rightly point out that while decorating the interior of the mosque a lot of pure gold was used, which was applied by means of technology called kundal. For a long period of time Tillya Kori was used as a main cathedral mosque. In the early 21st century, the building was listed as a UNESCO World Heritage Site.