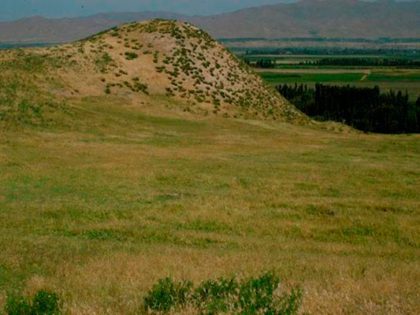 This historical and cultural monument was discovered in 2007 on the right side of the highway connecting Sanam and Telau. In the north-western part of the settlement there is a small fortress, located at a distance of forty-five meters from the line of the road. The area of ​​the inner city is six hundred to nine hundred meters. In the central part of Shahristan there is a small hauz-pond, the dimensions of which is 40 meters by 30meters.

From the southern side the inner city is surrounded with a chain of mounds, receding into the distance of two kilometers. The researchers managed to count on this chain more than thirty mounds. Also from the south side an antique canal the width of which is equal to thirty meters supplies the inner city with water. The maximum depth of the artificial construction is about ten meters.

In the same year there were discovered the first archaeological items. Exactly five years later here came a big research expedition. As a result of extensive work the researchers were able to establish that at a distance of three kilometers from the ruins of the fort there is a sacred place of Paygambar ota. Part of the scientist community believes that this historical discovery is directly connected with the city Tunket, the capital of Ilak