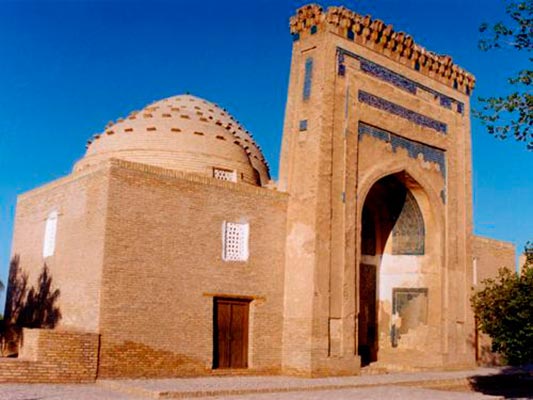 This mausoleum is not only the representative of the rich historical and cultural heritage of the country, but also the oldest of all the existing monuments. This extant mausoleum includes:

Scientists point out that the building of the mausoleum has given a lot of important information. For example, in connection with the permanent increase of soil layers and burials for many years, the mausoleum was able to accumulate a lot of information concerning not only the architectural appearance of the building itself, but also the surrounding area.

The majestic image of this construction is described not only in historical documents, but also in many literary works. For example, the ancient authors Navoi, Jami and Ahmed Razi in their works noted that Said Alauddin, well known for his generosity and wisdom, had built one of the finest buildings of his era.

In this final resting place there is a tomb (dakhma) decorated with majolica tiles. The architects succeeded in forming a pattern of incredible beauty from multi-colored tiles. It should be noted that the pattern of such kind can not be found anywhere else in Khiva. The only place where there are similar in technique patterns is the tomb of Sheikh Nadzhmeddin Kubro located in Old Urgench. Numerous studies have shown that these patterns are the same age of Khiva.

Tomb of Sheikh Sayid Alauddin was built at the request of one of his pupils Amir Kulol. At first glance it may seem that the appearance of the tomb does not differ by any refinement. For example, the bulk of stalactites at the corners of the building and decorated with an 8-angle dome are made so primitively, that it is impermissible for the tomb. Yes, the outward simplicity of the tomb really caught the eye, but it also created the contrast between external and internal decorations of it.

The internal structure of the mausoleum would suggest everyone that they fall into a different reality. It was hard to believe that such a monumental and richly decorated interior of the building was created by the same people that built the mausoleum itself. The base of the tomb was created on a stepped elevation enclosed by columns in the corners. The front part of the room is decorated with glazed majolica tiles. The walls are decorated with various floral ornaments inside which there are panels with patterns.

In some parts of the wall during the archaeological excavations there were found ancient inscriptions. The found ancient verses say that at the beginning of the XIV century the wise sheikh went to a better world. According to the established for many years centuries tradition over the graves of the deceased khans a mausoleum was erected, which eventually became a place of worship to them. In the middle of the XIX century Khan of Khiva Allakulikhan, wanting to show the depth of his reverence, decided to perpetuate the memory of the deceased predecessor by building a unique structure, surrounded by a large area.

In 1825, this mausoleum underwent extensive restoration: