Registration
Travel in Uzbekistan and Central Asia > Minaret of Djuma-Mosque 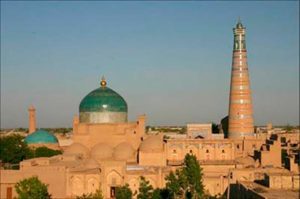 One nosy thing stands out in particular – five Khivas’ minarets, which are situated on the same line with a distance of about 200 m. Minaret called Djuma-Mosque engages the central point. Kalta-Minor situates to the west from Djuma-mosque and farther from the minaret of Biki-Djan. The location of minaret of Palvan-Kari and mosque of Seyid-bey Minaret is to the east. At the base Djuma-Mosque has a diameter about 6.2 m; its height is exactly 3.2 m. Minaret is crowned by dome and light -arch lantern with stalactite cornice.