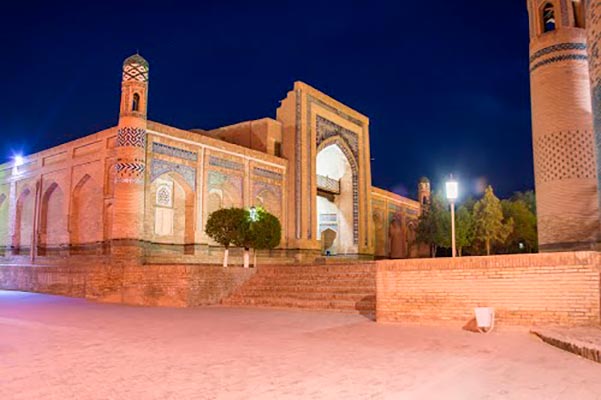 In 1871 in his tenure as head of the financial management of the state Niaz Muhammad Khan gave an order to begin construction of a madrasa in the complex of Ichan-Kala. According to the approved project, near the madrassa there was supposed to be a small market. Now there is a madrasa of Muhammed Aminhan near the madrassa of Matniyaz Divanbegi instead.

Features of planning of the madrasa

In the northern part of the madrasa there is one of the central avenues of the complex Ichan-Kala, to the south is the restaurant “Khiva”, which is housed inside a madrasa. From the south-east side is the Mausoleum of Said Alauddin. Madrasah. The mausoleum built on the orders of the then Minister of Finance, was equipped with various additional buildings:

As the main decorative element of the facade majolica tiles with a lot of vegetation patterns were used. The entrance doors are decorated with wood carving. Right above the entrance door of the complex builders installed a massive marble slab where an inscription in the Arabic script was carved.

During the educational process about forty-two students studied in this madrasa constantly. In early 1979, the madrasa was converted into a catering establishment. A similar fate befell the Madrasa of Aminkhan Mohammed, which also serves as a hotel. The total area of the madrasah, which became part of the hotel complex “Khiva”, is 36meters by 31 meters.