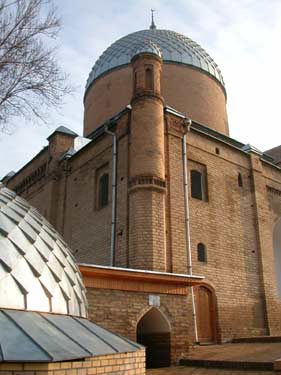 Sheikh Zaynudin Bobo’s mausoleum is situated in Tashkent, Uzbekistan. As a writer by profession Zaynudin Bobo dedicated his life to popularize order of Sufi, known as Suhrawardiyya. Nowadays we do not know exact date of his birth. Many people tell that he lived long life and died at the age of 95. His father Diya al-din Abu ‘n-Najib as-Surawardi, who lived from 1097 – 1168 and was a founder of Suhrawardiyya’s order has a purpose and decided to realize it with helping of his son that was sent to Tashkent with for spreading ideas of order. Sheikh Zaynudin was buried in the cemetery of Orifon village behind the Kukcha Gate (nowadays territory of Tashkent). There is an underground cell (called chillahona of 12th century) to mausoleum, where Sheikh Zaynudin spent his 40-day meditations (chilla) and chartak coming back to the 14th century. An exact construction date of building is unknown, but it is thought to be the end of 16th century and after three hundred years construction was rebuilt. According to information we have nowadays proportions of complex equal to 18 x 16 m., 20.7 m. high.