Registration
Travel in Uzbekistan and Central Asia > Mausoleum of Yunus-Khan 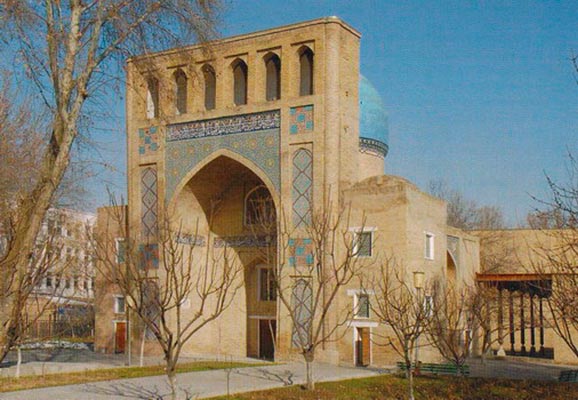 In Tashkent on Navoi Avenue you can find not only the famous complex of Shaikhantaur but also of Yunus Khan Mausoleum, built on the site of the necropolis of Shaikhantaur. From the geometric point of view, the complex is a “T-shaped” section, which includes a mausoleum and a khanaka.

The southern part of the building, where there is a niche oriented to the north, is characterized by a portal with a relatively low-wing. In the southern wing there also located two floors of small rooms.

The general layout of the hall is distinguished by not only the presence of the entrance doors on the three sides, but also by the presence of a massive dome of a spherical shape. The dome is firmly mounted on the cross-shaped arches. The inside of the dome is decorated with patterned designs. Rooms located on the second floor, have a number of domes of a thyroid form which in 1970 were completely restored. When decorating the windows Ganch (stucco) was actively used and massive arches were decorated with geometrically regular patterns, also made of stucco.