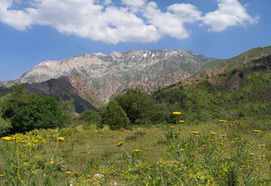 During the tour of Fergana Valley, you will definitely come to same name town. This city is Valley center. There are no ancient buildings, ruins and tombs, but almost all its pre-revolutionary appearance is perfectly preserved for Central Asia travel.

It decided found township on site off current in 1876. That was done for convenience placing military Turkestan regiment, needed retain control over conquered territory Kokand Khanate.

Town was renamed several times; became both New Margilan either Skobelev, but only in 1924 it’s acquired its present name.

Arriving then resting after road, go towards Karkidon reservoir, which is located near city. This beautiful, quiet place become home for birds’ variety: storks, starlings (mine), turtle-doves.

Additionally, violent flowering off trees and flowers begins in spring, which will make it possible enjoy unforgettable fragrant natural scents; make amazing photos about your trip. During summer, when mountain rivers (sajah) water warms up a little, you can swim inside small dams, where river’s flow appears not so fast.