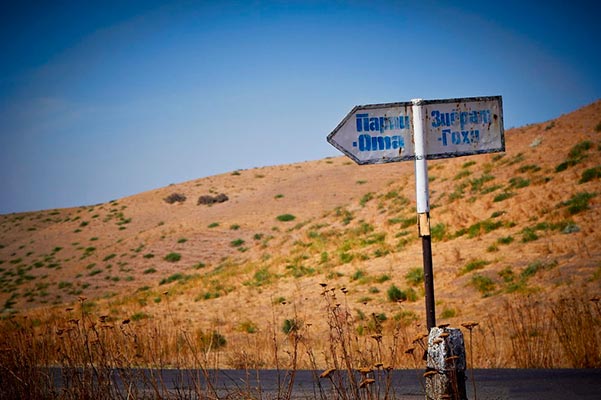 A few kilometers from the settlement of Imlak (10-11 kms east of Almalyk district of Tashkent province) there is a monument of historical and cultural heritage, characterized by its unusual shape. A loose rock with a hole in a small spur is considered Mazar, a graveyard which, in reality, doesn’t exist and has never existed. Various scientific researches in this area have helped to establish that this monument was the result of a degradation of a large piece of Paleozoic limestone. This result of work of nature is called Parpiata.

Healing properties of the sacred stone

Numerous legends tell of the healing power of these places. For example, there are many examples of how people received relief or complete healing, having been here, but today there is no documented evidence of such. Most frequent guests of the monument are the people who suffer from infertility, mental disorders, and so on. According to the legend, the suffering man must perform the sacred Ziarat (pilgrimage), and then three times pass through the hole of the sacred stone, called Parpiata.

Numerous historical documents indicate that the cult of the stone was largely supported by local rulers, not ordinary people. It is believed that in this way the local powers tried to give greater importance to their settlements, but all this failed to protect the monument from destruction. In the period when religion fell into disgrace, it was decided to blow up the monument, which happened in 1983.

But local authorities failed to break the people’s craving for spirituality. Over time, the locals created another healing stone, called “Gumbaz.” In the new cave now anyone can ask for relief from physical ailments.

In order that the request for assistance came into effect it was necessary to strictly comply with certain ritual:

Modern scientists can say that the popularity of this source has long gone beyond this single region. For example, in the Tashkent region there were several sacred places that were devoted to Parpiata. One of them is on the banks of the River Parpisay and another – in Jizzakh.