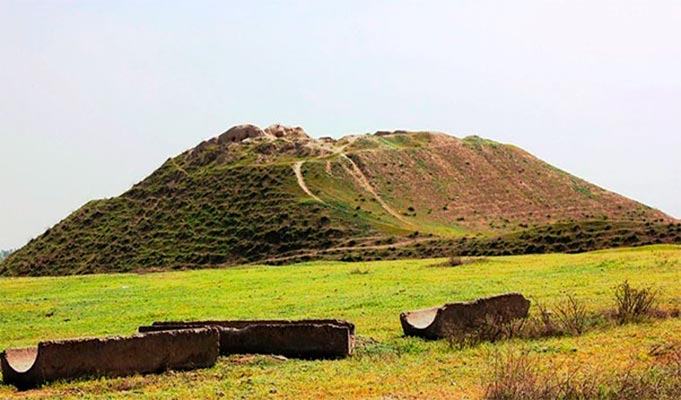 Over the past few years, numerous archaeological excavations have been held at this place. As a result of a long study of the results, it was found that this settlement is really the most ancient and the biggest representative of its kind. Scientists date this finding the end of the 4th century BC. It is believed that Kanka is one of the largest discoveries in the Tashkent region, located almost seventy kilometers from the capital.

Today scientists can not prove for a certain when this town was founded and reached its maximum stage of development, but most of them converge in the opinion that the most accurate time interval of existence of Kanka is IV B.C. – XII A.D

The first archaeological investigations were carried out here in 1868 by Vereshchagin. Subsequently, it was visited by many domestic as well as foreign researchers. In 1966, the monument was included in the archaeological map.

The historical complex has a number of features

As a rule, the settlements in Central Asia included three mandatory parts:

Despite these canons, Kanka had not one, but three shakhristan (city territories) merged to each other. In addition, each of these urban areas had its own defensive system. The river and the powerful walls were common border of urban areas.

The architects note that the fortified structure, located in the northern part of the first city had a maximum strength. It has almost a geometrically correct shape, the area of ​​which is about 7 hectares. Every corner of the building was specifically centered on all 4 sides of the horizon. The fortress is surrounded by a defensive wall, whose height exceeds 25 meters. Below the walls there is a moat, the depth of which reaches up to 50m.

The northern part of the settlement is also adorned with a large citadel, called the Ark. The area of ​​this fortification is almost 1 hectare, while it itself has the form of a regular square. The height of the citadel is about fifty meters. The builders of that time took care of the appropriate level of security:

The second inner city had a rectangular shape and had an area of ​​about 45 hectares. Historical evidence suggests that the second city had no significant fortifications. The degree of sophistication and the number of inhabitants of the city was high:

The third city with an irregular rectangular shape surrounded the second city on three sides. The main city street ran north to south, being surrounded by quite intense urban development, which included not only the craftsmen’s quarters, but also homes of ordinary people. Archaeologists say that the southern part of the third city was inhabited more densely.

The south-eastern part of the municipality had a great many hills, dotted with ruins. All this allows scientists to conclude that the construction here was multifaceted, exceeding an area of ​​400 hectares.

The first archaeological survey of the site of the ancient city began with Shahristan which was noted with multiple examples of Hellenistic architecture. During the work, archaeologists were able to study in detail nearly twenty meters of cultural layers:

The findings suggest a similarity of cultural models of the settlement and the Southern Sogdian period of the 4-3 centuries BC.

Fortification features of the town

The defensive system of this settlement earned a special attention of researchers. As a rule, on the strong plate made of brick, a defensive wall was erected. Each wall had its own internal gallery. Next to it was a fortification tower, protruding the wall at a distance of up to 8 meters.

In the vicinity of the tower there was a berm with a relatively low wall, used to stop the offensive of the enemy. Building materials used in the construction of walls fortification, have been known since the fifth century BC.

Construction experts note that the bricks used here had been well known since the fifth century BC. This arhitectural monument gave scientists a lot of finds associated with the direct life of local residents. For example, on the floor was found a ceramic pot, which had banded polishing similar to the era of Afrasiab in the III century B.C.

Ethnographers place a particular emphasis on the fact that Kanka is one of the few surviving cities with Hellenistic touches in architecture. Not all the exhibits and buildings have survived in a more or less suitable for the study state, however, the remained things exeed the remains of other ancient cities.

Today there is no single view on the question, why Kanka survived best. Some pundits believe that the reason for this was the death of Alexander the Great. After this event, one of his generals Seleucus with his son decided to create a powerful eastern power. Numerous military campaigns and the desire to protect the city from attacks of nomads, forced the rulers to take care of its welfare.

This view was repeatedly challenged by those who had carried out the study of the architectural features of the complex. The features of the layout of city streets, the type of brick used suggest that the construction of the city could not have been carried out by those to whom it was attributed. Too noticeable was the difference in the technologies used.

Nature successfully started to destroy all that nomads could not do. Numerous historical documents suggest that already in the 3 century BC tangible problems with drinking water and areas for grazing began. This problem was particularly acutely observed in the eastern and northern regions of the country. As a result, mass raids of people who were looking for the best conditions for living and farming to the prosperous regions began.

Mass migration led to the fact that Chach suffered the fate of modern New York. It was settled by a great number of people from different regions of the country, bringing their cultural and ethnographic traditions and customs. All this led not only to the active growth of Kanka but also to the emergence of various architectural styles and trends that were identical to those regions where people had come from.

Official Chinese chroniclers say that in a relatively short time Kanka evolved from a small provincial town into a major federal city. Five new territories became a part of the structure of Kanka. One of them was Uni, located near the famous Tashkent oasis. The role of the winter capital of the new state was transferred to Kanka-Uni.

After the settlement became part Kangui, Yuni was a powerful impetus to the formation of trade and economic relations on the Great Silk Road.The road crossed the following settlements:

Since the beginning of the first century AD, these areas had already had a powerful strategic momentum. The capital of these areas got a new name – Chach Chi Chzheshi. Chinese chroniclers, the data of which were actively used by scientists in the study of the history of the city, say that the supreme leader lived in a luxurious palace.

Numerous excavations in Shahristan III indicate that the city was subjected to a great many transformations. For example, the southern part of the city had metallurgical quarters, where there was active processing of iron Critz and nonferrous metals.There is objective evidence that in this area jewelry was actively manufactured. Resources for all of these municipal facilities, according to multiple Chinese chronicles, were taken from the following sources of minerals:

The appearance of its own coins

The process of making its own monetary unit starts here in the first millennium. Chach opted for a copper coin, which was covered with a small layer of silver. Historians point out that, these coins looked better (from an aesthetic point of view) than Sogdian possessions. The process of studying of the art of found objects has led to the following conclusions:

Then, historians say about the beginning of the process of unification of territories. Everything was intensified in the 3-4 centuries A.D, when many ancient powers began to actively disintegrate. In subsequent years, Chach was a part of different formations:

Several archaeological excavations have discovered a castle, which included four towers and several levels of security, made of mud blocks. On the territory of the well-protected complex there was a well-quipped temple. Rooms intended for the nobility and clergy were surrounded with buildings of household use.

The temple itself was relatively small, 5 meters by 5 meters. This place of worship was covered with a false dome, erected using the inclined beams. In the center of the temple an altar was located. The entrance decorated by strict canons of Zaroastranism was overlapped with a special wall through which none of the outsiders could see the sacred fire. The upper part of the building was a monolith with a magnificent view of the city.

In the first city a luxurious city temple was discovered, the core of which included:

This religious building, destroyed during the siege of the city, was even mentioned in a few Chinese chronicles. Archaeologists have managed to establish that only some “bulls” managed to survive that was used for printing on sacred gifts. It is noted that in the city there were many places of worship. Excavations suggest that in many parts of the city there were fire altars with religious statues and and other things.

In the middle of the 6th century AD, already in the eastern part of the country there appeared a new power – Turkish Kaganate. Despite the fact that many people of that time feared for the future prosperity of the city, everything went according to the most optimistic scenario. The city got not only economic freedom, but also significantly increased its political clout. Peaceful development of the city was interrupted in the 7th century, when the representatives of people of Chach couldn’t leave the khanate. As a result, the state capital was moved to Tashkent. As a result of these events, the settlement area underwent some changes. For example, part of the defensive wall was destroyed. However, it was managed to break negative trends in the 8th century AD, when the city was reborn in the former greatness.

The period of rapid growth

Throughout the 9th and -10thcenturies the settlement experienced a period of rapid growth. At this time, a suburban area of the ​​municipality was actively growing in size. There appeared new craft shops and the area itself increased to three hundred acres. The town was named Harashket.

Historical evidence suggests that prior to this, the city ranked second in the country in importance after Tashkent. One of the major monuments of that era has survived to our time. It is an architectural complex of Qarakhanid rulers, located inside the first city. In the third city traces of multiple trade and craft shops were discovered.

Multiple archaeological excavations show that a large number of artifacts can be found at the place where the city existed can find:

Historians say that the decline of the history of this ancient city happened because of the change of the river flow of the Akhangaran that took place in the early 12h century.