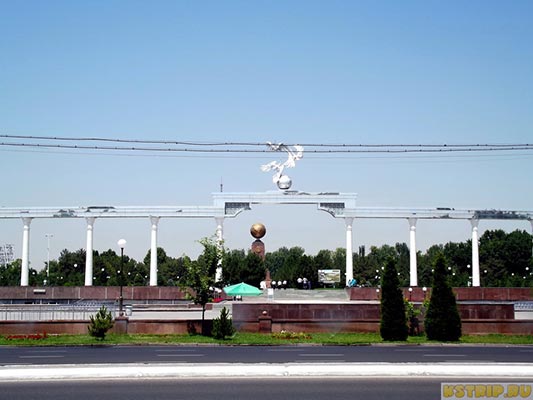 One of the modern attractions of Tashkent became the Independence Square, the history of which begins in the 19th century. Initially, it was called the Cathedral, because of its proximity to the Transfiguration Cathedral, located opposite the residence of the governor-general of Turkestan. Later, in the 30s of the 20th century it was renamed the Red Square.

After the installation of the monument to Lenin (1936) evolved architecture of the complex. Next name change happened later – in 1956, now it has become – Lenin Square.

In August 1991, Uzbekistan became independent. The following year the area was named Independence Maydoni. Monument to Lenin succumbed to the Monument of Independence place, having a view of the globe with an enlarged silhouette of the territory of Uzbekistan.

More than 10 years on the area held celebrations – a parade and a concert on the occasion of Independence Day. After construction on the area of the Uzbek Senate building, the reconstruction of the Cabinet and other structures are organized pedestrian zone.

Colonnade, decorated with figures of storks – is the first thing you see coming out of the subway. Birds symbolize peace and tranquility in the state.

Now in front of Independence monument is a statue of Mother with baby, symbolizing the Motherland.

In addition Mustaqilliq Maidoni known Walk of Fame, and memory. There is a pavilion with carved wooden pillars, which are recorded in a memory book of Uzbek families, who perished in the battles against the Nazi Germany. At the end of the alley is a monument of the Sorrowful Mother of the Eternal Flame.