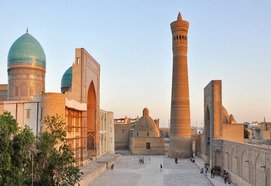 Go to the Gallery
Throughout his life, Mirzo Ulugbek (grandson of Amir Temur) built total of three madrassas. Out of them, Ulugbek Madrassa in Bukhara was built first. The other two were founded in Samarkand and Gijduvan. Process of building had been completed by 1420. Ulugbek Madrassa is a 2-story building that consists of mosque, rooms for students and study rooms. At the front of the madrassa there are turrets and loggias. UlugbekMadrassa includes four domes and minarets in corners. Facades of the building were recovered and majolica was used for decorating.Entrance gates have the following saying on them: “Aspiration to knowledge is a duty of each Muslim man and woman”