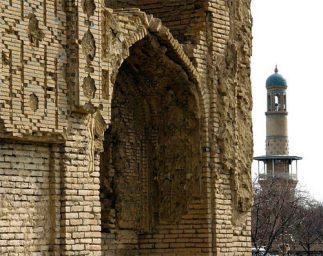 Ishrat Khan Mausoleum is one of the largest tombs for children and women. This building was built at beginning 20th century. That tomb is located north mazar Abdi Darun. Constraction has large central hall either portal. Under big hall situated children’s either women’s burial. “Israt Khan” in Russian means “House of Joy”. This can be interpreted as “eternal home for heavenly life.”

The interior looks very interesting travel tour Uzbekistan: design used mosaic panels, ceiling lamps off unusual shape and murals on walls. Until today, dome has been very well preserved. According to one version, it is believed that customer was Abu-Said-Habib’s wife, who same year’s period built Mausoleum Khavend-Sultan-Bika for her daughter.