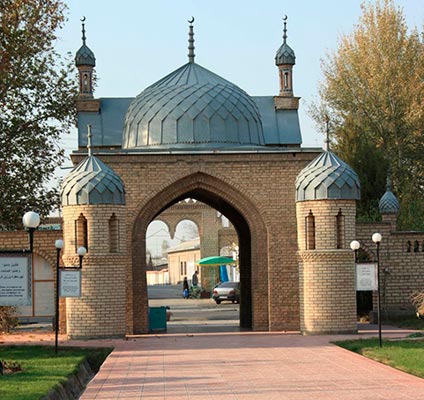 The historical and cultural monument, built on the site of the tomb of the Sheikh of Yassaviya tariqat Zangi-Ata, who lived in the fourteenth century, includes several components. Firstly, the burial chamber of the sheikh has quite a luxurious interior design.

Secondly, the complex has a small hall dedicated to the faithful. Thirdly, the part of the yard had:

A mosque;
Plenty of rooms for guests;
A minaret;
A near-gate structure;
A big body of water.

In the following decades, this complex became a place of constant pilgrimage for Muslims from different parts of the country. Archaeologists suggest that the tombstone on the burial place of the sheikh was established only during the reign of Amir Temur. Thanks to the decision of the next ruler, Mirzo Ulugbek, the tomb got a spacious hall for believers and domed constructions. In the next few years the complex received a vast courtyard territory. The first major restoration work in the complex was organized at the beginning of 1802. The second time the restorers came here after 197 years.

Architectural features of the minaret

The building, erected by one of the best architects of Tashkent was completely built in the classic Turkish style. The main inspirer of the construction was the person who decided to consciously replicate the appearance of classical Turkish minarets, which was manifested in a variety of small details:

A large number of traditional Turkish epigraphy;
Almost all the decorative elements are carved on a plate made of plaster;
Above the complex entrance there is a plate with inscriptions of sacred texts;
The lower part of the minaret is decorated with the image of a labyrinth. The peculiarity of this labyrinth was that, there were two entries to the central part of it;

Above the labyrinth a puzzle written in bright paint can be found, which can be quickly unraveled. To do this, scientists suggest thinking about two facts. Firstly, in the Turkish Ottoman Empire the ruler played not only an important administrative role, but also he was the spiritual leader of the nation and all Muslims in general. Secondly, the geometric puzzle designed as a labyrinth, was to emphasize all the obvious fact -whatever way a Muslim chooses, he always comes to the spiritual and political center in Constantinople.

The front entry composition leading from the hall where the remembrance of the dead occurred, to the room of the graves was luxuriously decorated. For example, everywhere there are different mosaic patterns and ribbons of various inscriptions, citing the holy book. In the mid-twentieth of the last century, most of these decorative elements were lost, but in the early twenty-first century, a group of architects and restorers managed to restore them completely.

Tombstone, which became the subject of art

Not only his life itself, but also the final resting place of Sheikh Zangi-ata can be considered an object of real art, which embodies the best examples of carving on marble surfaces. Long-term study of the tombstone has helped scientists to conclude that in its decoration classical paleographic inscriptions, typical of the representatives of the Samarkand school were used.

On each side of the tombstone Arabic verses are carved with large letters that speak not only of the great contribution of the person buried here in the development of culture and the entire state, but also the infinite love of ordinary people.

The upper part of the tombstone was used to create a 4-petal cartouche, framed by luxuriant vegetation ornament. Also, the tombstone is decorated with an epigraphic memorable pattern, stylized in the form of quotations from the holy book.