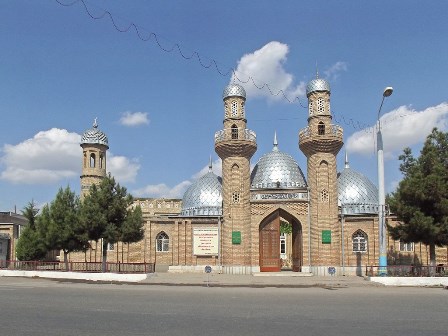 Namangan is same name region capital. It is located northern part Fergana Valley and considered the third largest either most populated Uzbekistan city after Tashkent and Samarkand.

During archaeological research on present region territory it was revealed those earlier times this place was an ancient settlement. At early sixteenth century, after strong earthquake, inhabitants destroyed Ahsikent moved to Namangan.

City is known for its craftsmen since antiquity. In region, representatives of the oldest craft dynasties continue develop their ancestors art including: potters, blacksmiths, jewelers, coppersmiths, fabric makers, weavers, others crafts.

Among sights, travelers need visit Khoja Amin mausoleum “Khodzhamning Kabri”, whose ancestor was famous Shaikhantaur Sheikh Havand Tahur. Unfortunately, only part off mausoleum complex either mosque has survived until our times. But even in preserved complex part one can see turrets or portal pylons decorated with quotations from Quran.

By purchasing last-minute trips to Chartak resort, anyone can improve his health by experiencing all natural miraculous power off iodine-bromine mineral water. Fresh mountain airs, clear, swift sais water, these fabulous places nature will not leave anybody indifferent and they want come here again.