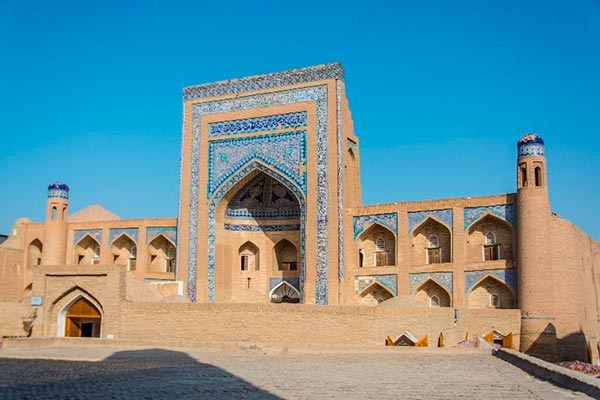 Many historians and architects rightly attribute this madrasa to one of the greatest creations of the famous Khan of Khiva Allakulikhan. Thanks to his efforts Khiva managed to become not only one of the major military centers, but also an important cultural and political city of the kingdom. Throughout his reign, Khan of Khiva Allakulikhan actively developed in the city the construction of quality housing, erected on the site of the old.

The construction of specialized buildings actively developed. For example, the building of an old madrassa was completely demolished. The ancient building, built out of the ordinary mud brick, was replaced by a more complex project, built of baked bricks. One of the brightest examples of architectural madrasas, erected under the patronage of the Khan of Khiva, is a madrasa, which was erected on the site of the ruined walls of Ichan-Kala. This building had a number of features:

2. Prior to the start of the construction part of the city wall was destroyed;

3. At the site of the disassembled parts of the gate the Madrasah portal appeared;

4. As a result of the construction of the square there appeared a classical form of “Kosh” – twin Madrasahs.

The architects of that time tried to keep the important aesthetic requirements of the Khan, who wanted to preserve the balance of the buildings in the central part of the city. That is why it was decided to raise the building of Allakulikhan madrassa for nearly three meters on a special artificial platform. As a result of these manipulations the madrasas could fit into the overall architectural ensemble of the square.

Buildings had their own characteristics

The interior of the madrassa had a number of differences from the traditional forms that existed at the time:

1. A set of 2-storey buildings, located above the gate domes;

2. Each room has one door and a small window;

3. The floor of premises was decorated with special baked bricks;

4. The walls were decorated with Ganch (stucco);

5. The interior of the arches had no special decorations;

6. All madrassas were built in a classic type of trapezoid;

7. The complex includes a winter and summer mosque;

8. The premises along these madrassas had no domes;

9. A spacious darshana (classroom) was built;

10. The nishas (holes on the walls) didn’t have any different luxurious design;

11. All the walls are of a different geometric accuracy and are completely lack of decor.

The simplicity of the interior design was complemented by a very unusual exterior decoration. For example, the madrasah of Kutlug Muradinak is different with a wide use in its construction of a ganch (stucco) color, relief terracotta of a stamp form, glazed majolica and so on. Every madrasa had a unique pattern system, thanks to which today critics and archaeologists can draw important conclusions.

If you look closely at the interior of the madrasa, you can see that the portal of the mosque is literally strewn with numerous floral patterns. Here is a direct entrance to the summer mosque. It is important to note that for the Eastern style it was not accepted to decorate the back side of the main portal, but in this case an exception was made.

The history of the construction of the architectural complex

Today it is impossible to completely restore the original history of the construction of this facility. Unfortunately, scientists can be satisfied with only scraps of information obtained from artifacts found during the research. It remains controversial even the year of the start of the construction of the complex. Old-timers say that in the early 60s of the last century it was still possible to see in this place a preserved column. There was a date on it 1834.

The study of the numerous historical and literary sources revealed that the process of the building of the madrasah started around 1834-1835 AD. Also, the scientists were able to detect that the overall artistic style that was used for the application of painting on the walls of the structure is similar to the style of a traditional Arabic script Suls.

Today this madrasa is converted into a national center for handicrafts.