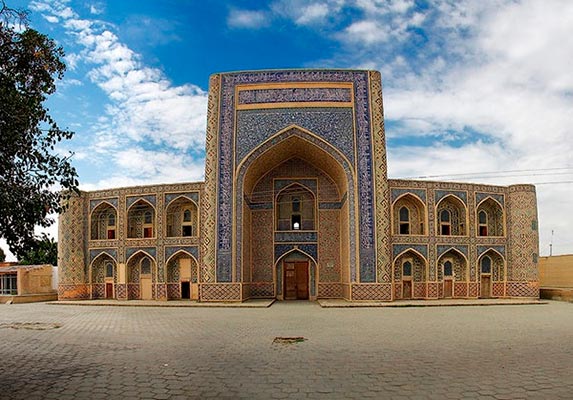 This madrasa can be found in the southern part of the Ichan Kala complex, where the madrasah of Kutlug Muradinak (1855) was built. It is believed that this religious building was erected in honor of the son of the ruler Abdullakhan, who died under tragic circumstances. Domestic and foreign historians have noted that the general layout of the building was made very simplistic. The only element that gives the entire complex at least some grandeur is a direct portal.

Features of the architectural structure of the complex

The northern part of the complex is marked by the presence of one link of mionsarays ((a lobby and cranked corridors) and to the south two. The southern part of the complex is also characterized by the presence there of the domed mosque premises, which had been deliberately shifted slightly from the transverse axis going from the lobby. It was decided not to build the domed hall to the north-east of the complex, replacing it with multiple hudjras (cells) surrounding the common courtyard of the madrasa which has a rectangular shape. In the center of the courtyard there is a traditional well.

Cultural heritage of the madrasa

Today it is impossible to say, for sure, exactly what became the reason for the construction of this madrasa at this place. According to one version, which is supported by multiple of literary evidence, after the death of Abdullakhan, who was distinguished not only by his hot temper, impatience, but also by his anxious attitude to the concept of friendship, his mother decided to perpetuate the memory of his son in the form of a madrasa.

In subsequent years, the madrassah was reconstructed several times before it presented to the contemporaries in the final view. Today in the madrasah a nature exposition is located telling the guests about the wonderful diversity of the local flora and fauna. The total exhibition area exceeds 170 square meters.