The house-museum of Tamara Khanum 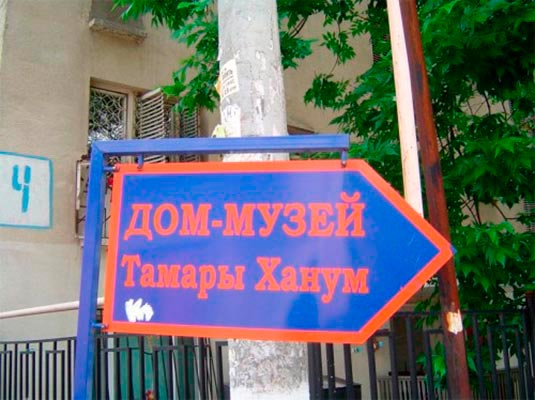 Tamara Khanum Street 1/41 is known to many residents of Uzbekistan, because it was here, away from the bustling city center, lived a woman, who became a real gem for the people of this country. Tamara Khanum, after whom the street is named, was a great singer, a dancer, who devoted her life to the devotional service of art.

She first appeared on the stage being a little girl. The natural attraction planted by Armenian roots (her real name is Tamara Petrosyan), helped the girl to enter a theater college, after which, by the will fate, immediately went to the scenes of most celebrated cities of Europe. However, having quickly earned the reputation, the girl did not stop there. Through correspondence with the world’s leading artists, she diligently helped to open theaters across Uzbekistan to give young people the opportunity to reveal their talents, without going, as she did, to Moscow.

The talented dancer soon received an invitation to sing in the Uzbek Philharmonic, for which the 30-year-old woman was very happy. Tamara’s uniqueness was that she would convey to people the song and dance folklore of the world. From that moment began a new life-line of the already well-known singer. Showing her performance in different countries, she would also bring traditional costumes, as well as new songs, the performance of which was so perfect, as if she passed her own national culture. The woman repeatedly performed during the Great Patriotic War, maintaining the spirit of the soldiers who fought against fascism. For that Tamara was awarded the rank of captain. Outstanding singer and dancer died in 1991, and 3 years later, in honor of the great and beloved by many actress, the house-museum of Tamara Khanum was opened. It tells visitors the history of the life and work of the singer, and gives them the opportunity to get acquainted with the unique collection of costumes from all over the world, in which beautiful and inimitable Tamara Khanum performed on the stages.