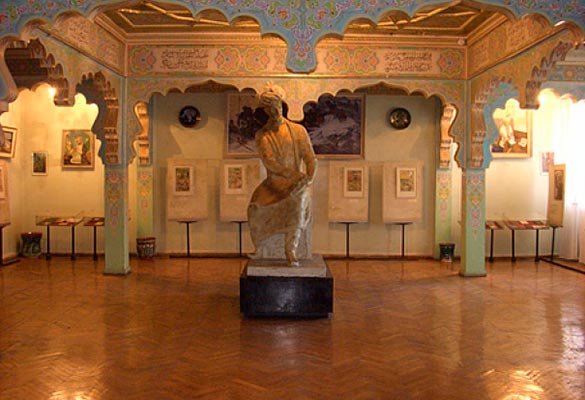 n Tashkent, at Navoi Street, 69, the literature museum friendly opens its doors for visitors, which contains unique works of poets of Uzbekistan. The museum was built in honor of the 500th anniversary of the great poet of the East – Alisher Navoi. Having been at various times under the supervision of various institutions, the museum finally got its independence. It is safe to say that in the museum a number of attractions, as well as an incredible treasure of all Uzbek people are collected. More than 17 thousand works of art, archeological monuments, paintings, portraits, handicraft products, are presented for the review of thousands of visitors. The museum is divided into sections, each of which corresponds to its orientation. Its real property is unique manuscripts, copied by calligraphers in Arabic, Persian, Azeri and Uzbek. Also, the staff made a single database, containing manuscripts and short films produced by scientific and educational expeditions.

The collection of lithographic books, numbering more than 65 thousand copies is priceless. It consists of life stories of writers of Uzbekistan since the last century. Of great value is also the literary heritage of such famous figures such as Furkat, Alisher Navai, Babur, which is the golden fund of the literary museum.

The museum workers continue to conduct scientific work, bringing from abroad thousands of color slides, telling the story of the East. This is the only place, where under one roof priceless manuscripts and books of famous Uzbek writers of completely different time are collected. Literature Museum shares with anyone dozens of well-known names and thousands of unique works.