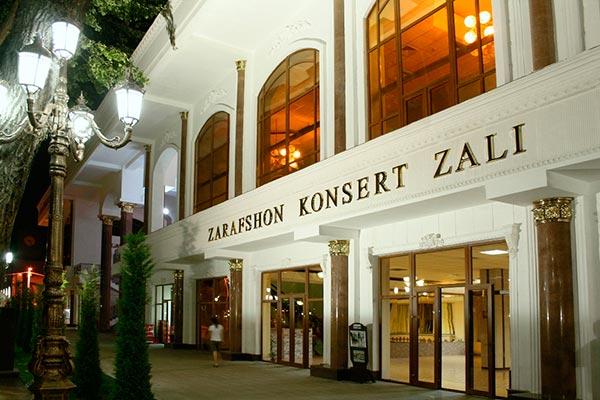 Concert hall “Zarafshan”, one of the most unusual concert halls of Tashkent is located In Yunusobod district, on Matbuotchilar Street, 17 near the metro stations Amir Temur and Mustaqillik Maydoni. It is unusual not only because of its location but also its interior furnishings. You can start with the fact that the concert hall is part of a large entertainment complex in whose territory it is located. The interior design seems a bit surprising and unusual. It is really so, because instead of rows of seats, so familiar to most visitors, there are tables set with sofas that occupy tier after tier throughout the concert hall.

Another feature of it is, that while enjoying the performance; one can not only be satisfied spiritually but also qualitatively eat dishes that the concert hall menu offers. The menu list is quite big. You can taste not only light salads and snacks, but also taste the delicious first course meals, as well as a variety of side dishes and meat, vegetable, mushroom dishes. Staff are beckoned to the client via a special button, which all the tables in “Zarafshan” are equipped with.

Not only concerts, but also a great variety other events are held in the Concert Hall, be it theatrical performances featuring local artists or art groups invited, children’s festivals, which are traditionally attended by a lot of kids from all over the country. Also, fashion shows, which involved both local craftsmen and foreign guests, have been repeatedly held on the stage of the hall “Zarafshan”. In addition, the concert hall is used as a cinema, as many visitors like to watch their favorite films while eating expertly cooked goodies.