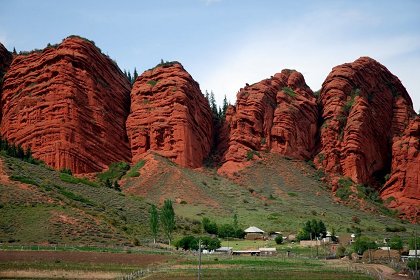 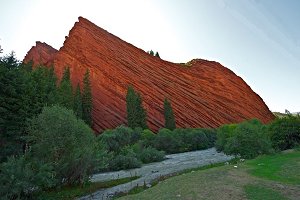 The name of Jety-Oguz in Kirghizstan belongs to several natural objects. But first of all it is a rocky massif on the shore of Issyk-Kul Lake. If you translate this phrase into Russian, you will get the meaning “seven bulls”. But because of the softness of rocks, erosion and constant winds, the cliffs have now become more than seven. Tourists can count them up to ten or eleven. But as they say, to see is better than to imagine. Kirghizstan tours are quite accessible, and with tour operators you will know a lot more.

Rocks are especially beautiful on sunny days, their reddish shade resembles a flame, when beams of the sun hit them. And Tien-shan spruces growing on slopes of mountains, sometimes reach sixty meters in height. If you think about the age of these trees, each spruce grows in this region for more than one hundred years.

The natural object of the same name is the whole Jet-Oguz canyon. It originates within twenty-eight kilometers westward of the city of Karakul, at first it is a green valley, which gradually turns into the plateau.