FOLKLORE OF THE KIRGHIZ PEOPLE 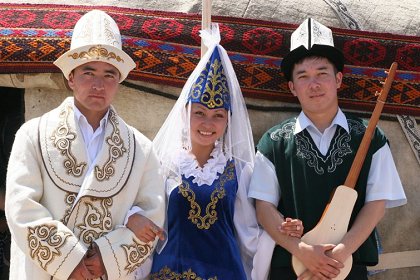 Those who are interested in Kyrgyzstan residents’ folk art can get acquainted with folklore epic, musical instruments and music compositions.

Nomadic Kyrgyz have special attitude toward music. Conventionally, they divide it into different song styles. One was created as accompaniment to playing original instruments.

More often you can hear solo musicians. In some competitions used alternate singing musicians and singers. All folkloric works were transmitted orally. Due to fact that performers transmitted all melodies by ear, they were not only these works interpreters but at the same time their co-authors.

A significant part of national Kirghiz people creativity consists of folk songs. Particularly, Akyna singing is distinguished from folklore. Akyn is a folk singer improviser who accompanies his singing by playing comuz.

Kyrgyzstan tour reviews are always positive, where else could you plunge into this tradition flavor.