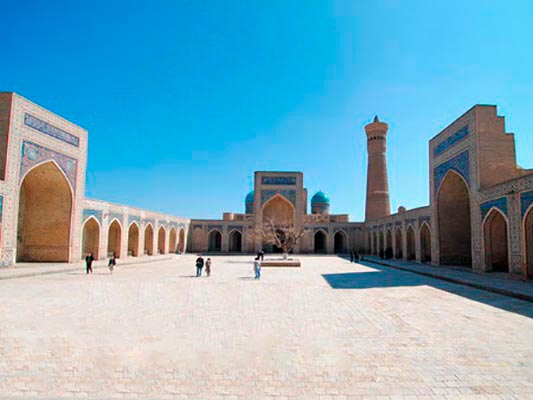 Translated name of the complex is “a large base of the minaret.” It can be found in the immediate vicinity of the famous minaret Arslan Khan. The structure of the complex today includes:

The process of reconstruction of the complex, located in the “inner city” of ancient Bukhara, is directly related to the order of the head of state, who personally oversaw the return of the country another important historical and cultural monument.

This mosque by many historians and theologians refers to the list of the first Friday mosques based in ancient Bukhara in 713 year. The founder of such sacred buildings is considered to be a well-known military commander Qutayba ibn Muslim. A few centuries later Muhammad Arslan Khan (12th century), a Karakhanid ruler of Bukhara ordered to transfer the mosque and minaret to the western part of Shahristan. Good intentions of the governor ended, unfortunately for believers, with big problems.

Numerous scientific expeditions, engaged in research of this mosque, could reveal an interesting fact. Under the existing foundation of the mosque today it is easy to find the remains of several previous ones.One of them was the mosque of Arslan Khan, which fully coincided in size with the now existing. The Bibi Khanum Mosque, built in 1404 of brick, was the largest place of worship of this kind in those days.

In 1514 the Great Mosque went through its first major renovation. To recreate the numerous decorative elements the best specialists of that time were invited. In 1542 in the niche, located on the entrance portal, a large board made of marble with scripts was placed. The text on this board stated that residents of Bukhara were exempted from a certain types of taxes. The entrance portal of complex is also decorated with quotations from the Koran.

The significance of this building is largely determined by excellent epithets we hear from not only historians, art and culture specialists, but also from ordinary people who consider the Minaret Kalyan one of the finest religious buildings of Bukhara. The study of numerous literary evidence revealed that the minaret was built by the order of the then ruler of Bukhara Arslan Khan.

The construction site, located in the immediate vicinity of the central mosque, was to emphasize the importance of the minaret. However, the first attempt to build a sacred building here was a complete failure. Errors of builders led to the collapse of the erected minaret on the existing mosque. The repeated attempt was made around 1127. The new minaret whose height exceeds forty seven meters remained to the present day.

In the middle of the barrel of the minaret a faint Kufi inscription was found. Another inscription was discovered by experts in the upper part of the minaret near the lantern, composed of numerous terracotta tiles. A distinctive feature of this composition was the presence of plates with a Kufic relief inscription covered with special turquoise glaze.

In 1920 the minaret experienced the power of weapons of General Frunze, who with an aimed shot destroyed one of the eaves and the inscription. Three years later, here came the restorers, who couldn’t restore the lost sign and replaced it with mosaics. In 1976 the forces of nature tested the strength of the minaret. Only four years later restorers managed to renew the items destroyed by the earthquake.