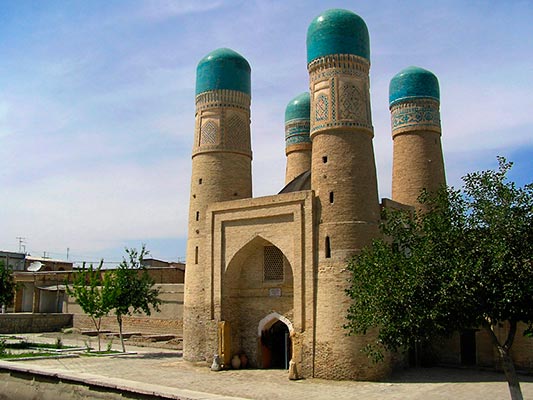 Madrasah is refered to the list of the most unusual architectural structures in the city of Bukhara. The madrasah is located in the vicinity of the Labi-House on a large open area. Chor Minor complex, which is translated as “four minarets”, has four minarets of a small size set exactly in the corners of it. Each of these minarets is covered by a blue dome with identical patterns. There is a hypothesis that the number of small minarets is identical to the number of then existing world religious movements. In this way architects tried to understand all the important aspects of each doctrine. The presence of the following well-known religious symbols on the domes of the minarets supports this version:

Before entrance to the complex there is a spacious yard and a pond, decorated with stone blocks. On each side of the madrasa there were built many rooms for students and clerics. Archaeologists say that this madrasah, the construction of which was fully funded by Khalifa Niyazkul, survived till today in almost original form.

The only thing that remains questionable for historians and archaeologists is the date of construction of the madrasah. Today it is impossible to say exactly whether this structure belongs to the beginning of the XIX century or a later period.