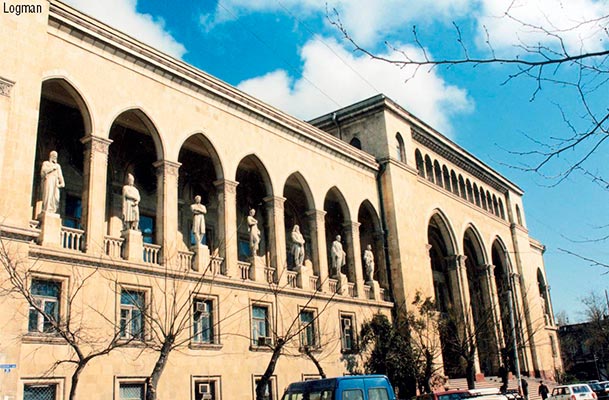 The architecture of Azerbaijan is also diverse, and in many respects its features depend on the geographical location. The most famous examples include the Absheron Castles, the fortifications of the Baku Kremlin, the Maiden Tower in Baku, the palace of the Shchekino khans in Nukha.

And from an architectural and historical point of view it will be interesting to look at the famous oriental baths and caravanserais (the eastern variant of inns where merchant caravans stopped). Present hotels in Azerbaijan are true receivers of old traditions.

Most of the time in Azerbaijan they built of stone and raw brick, although the choice of material again depended on where the future structure was built. In the mountains, the villages confused the guest with the viscous narrow streets, where the houses clung to each other and hung over the pavement, and were more like fortresses than peaceful settlements.

On the plain of the house, fringed with green velvet gardens, were scattered here and there, and the geometry of the villages itself was more than happy.

The traditional form of houses is also carved out over the years and thought through to the smallest detail. Flat roofs serve, and served especially to dry and harvested fruits and vegetables. In the foothills usually built two-story houses. The lower floor was given for economic needs, here cattle was overnight. On the second floor there were bedrooms. The house was heated by a fireplace, but in a particularly cold winter night they brought a special iron stove, covered it, and so arranged a large heating pad. To keep warm, the mattresses were spread directly on the floor, and for the day these beds were cleaned in the closets.

On the Apsheron peninsula, mostly single-storey residential buildings were built. The main distinguishing feature of them is the kitchen, where besides the open hearth, there was also a tonedir (a stove in the form of a truncated cone). In the tune were baked homemade bread (churek and lavash) from wheat unleavened dough. To ensure that the smoke in the kitchen was not a yoke, there were specially equipped two pipes for drawing.

Another interesting architectural feature is the dug-out houses, where all the windows and doors decorated one facade, framed by a gallery. The gallery was used for household purposes, here dried herbs and fruits. Architectural solutions of the past are still used today, however, with some innovations, the floors are no longer earthy, but they prefer to sleep on the bed, not on the floor.

On the south-western slopes of the Greater Caucasus, the houses were not flat, but pitched roofs. The reason for this – a large number of rains, as well as the development of sericulture. In the large lofts under the roofs a silkworm was bred, dried fruits and vegetables.

The territory of Azerbaijan was built mainly of brick and stone, but there were also wooden houses. It was not our usual log, but wicker structures. For insulation from the cold and giving the structure additional strength, from inside the walls were coated with clay. In the lowlands along the sea shore, where the unfortunate in the hot months attacked the bastard and midges, in addition to the usual dwellings, erected a tower for sleep, where at the height of the gnat did not disturb people during the rest period.

Nomadic tribes, naturally, did not build large stone mansions, in summer they lived in simple tents, and for the winter they dug out dugouts.