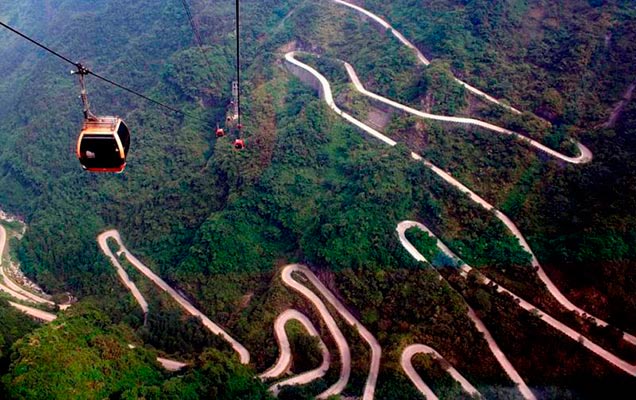 Modern landmark of Armenia, which managed to enter the Guinness Book of Records on several indicators is a cableway “Tatever”. The length of the entire path along which you will ride the modern cubicle, is 5.7 kilometers away, and the speed of movement of the suspension of the vehicle in some areas exceeds 30 km / h, so that the road is one way takes a little more than ten minutes. The tour operators of Armenia are advised to visit this place, as a fan of natural beauty and history buffs.

The project was implemented efforts of the Swiss company “Garaventa” which is aware of the construction of such roads is not hearsay, and managed in record time, only ten months to create a cable car which links the village of Tatev and Halidzor. This road is the longest of its kind in the world. The first cabinet went to the delight of the creators in their journey to the end of 2010. Air path runs between the three pillars, which are to be installed even had to come up with new ways to strengthen the foundation. In the air there is no way an intermediate station, it follows immediately from Alizdora to Tatev and back. The highest point which reaches the road, is 360 meters. The structure itself is so strong that it is ready to withstand the most powerful gusts of wind. The capacity of each cabin is 25 people, so the queues on the landing can be avoided. However, the road workers are asking visitors not to arrive too late, so they could have time to fit in the last wagon – the road works well on schedule and the extra passengers does not take. So if you want to avoid spending the night in the monastery, come early.