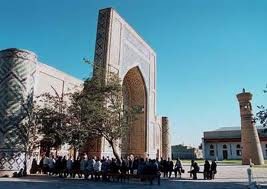 Analysis of the development of Uzbek traditional clothes shows that in large cities such as: Tashkent, Bukhara and Samarkand, production of clothes were more advanced than in regions. Tadjik culture had significant influence on Samarkand clothing. As well as Samarkand art played role in Tadjik culture.

Areas inside Uzbekistan also played the role in development of Samarkand dressing styles. The most influential was Bukhara. Trade and cultural ties with Bukhara brought significant changes in the clothing in Samarkand. As a result, women dresses acquired new elements and styles. Female clothing traditionally consisted of trousers, wide dress, veil, munisak, headwear, robe and shoes. The style of casual and occasional clothes was basically identical. With the difference that occasional clothes were brighter, made of better fabric of different textures.

When women were choosing clothes, they considered first color of the material. Red colors were mainly preferred by young ladies. This was the color that symbolized fertility, love and holiday. In India, for example, for wedding ceremonies, brides wear red dresses. Elder women chose dark blue colors. Old women preferred blue and older women were wearing white clothes. White color symbolized purity or clarification. It was believed that after people are pure and honest, they can go “tariqah” way. By wearing white clothes, old women were passing purification process to be ready for leaving this world.

Wide female dress looked like a shirt for males. It was an important element of women clothing. With the time, women dress started to separate from men clothing. New elements such as yoke, collar and others, were added. Despite these new elements, original dress style was wide spread before the beginning of 20th century.

Women dresses in Samarkand were different from women dresses in Bukhara. Samarkand dresses had two times narrower sleeves. Wide sleeves of Bukharian dresses allowed wearing several more dresses under it without feeling uncomfortable. There is a belief that first dresses were of rectangular form and later they had cross-cut form. But it is not certain. Most probably both of this forms existed at the same time.

One of the elements of outer clothing was “munisak”. It could be also known as minsak or mursak. This clothing is a traditional element. Unlike shirt and robe that have almost the same patterns, munisak does not have a collar. Samarkand munisak was so famous, that people in Bukhara, Tashkent, Khorezm and Fergana were buying them. Samarkand munisak is sometimes called “kaltacha”. Its distinct feature is that under sleeves there were a lot of pleats. There were some pleats even on the back. Because of pleats on the back made a person wearing a munisak is slimmer. Munisak is only for women. Men do not have similar clothing.