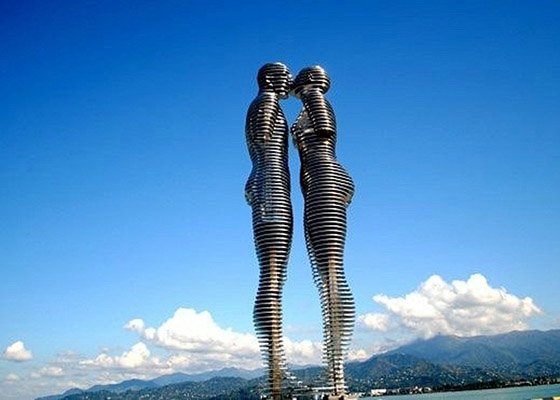 Contrary to popular belief that Batumi is the only resort-recreational town, is located here many ancient monuments. Jame Mosque Orta, dating from the nineteenth century, is one of the few sites where you can see samples of classical Arabic calligraphy. Also on the territory of Batumi can be found places of worship belonging to different denominations:

To the list of the most famous churches, listed national artistic heritage includes:

Gonio Fortress – famous architectural monument, located at a distance of twelve kilometers from Batumi. Many centuries ago there was a fortification built by the Romans. Subsequently, there was a Byzantine base. Unfortunately, up to now it remained only a small part of the once majestic castle. Nowadays, tourists who prefer eeshevye tours in Georgia have the opportunity to view about nine hundred meters preserved wall, about eighteen towers and so on. Some documents suggest that the fortress was buried the Apostle Matthew.

Another must-see destination for visiting the numerous museums are located in the city. Adjara Art Museum is ready to offer guests a vast collection of artists, related to the European and Russian art of XIX-XX centuries. Several rooms in the museum devoted to the works of famous Georgian painter Pirosmani.

Nobel Museum allows you to see the old Batumi the mid-nineteenth century. During this period, the town was under scrutiny and no less generous funding of representatives of the family Rothschild and Nobel. The Joseph Stalin Museum, you can get acquainted with the early stage of the life of this political and public figure. Among Stalin presented in the house-museum of the things you can discover his desk, bed and wardrobe with the surviving books.

Batumi Archaeological Museum – is one of the largest in Georgia collection of numerous documents, tools and a variety of jewelry found in the southwestern part of the country.

Citizens who choose the last minute tours with visits to nature reserves may visit the lake shore Nurigel and walk in the park “May 6th”, the entrance to which is marked by the planted tree King Alexander III. Every day, dozens of tourists rent boats or catamarans to take a leisurely stroll on the water surface. In the park also has a large aquarium and dolphinarium.

Ardahan Lake – a unique natural lake is separated from the sea by a small plot of land, the width of which does not exceed a few meters. In the area of the lake, local authorities opened a few light-color fountains, numerous catering establishments and so on. In the vicinity of this lake is the Batumi National Botanic Gardens, which presents many rare specimens of flora from around the world.