Registration
Travel in Uzbekistan and Central Asia > Art of Georgia 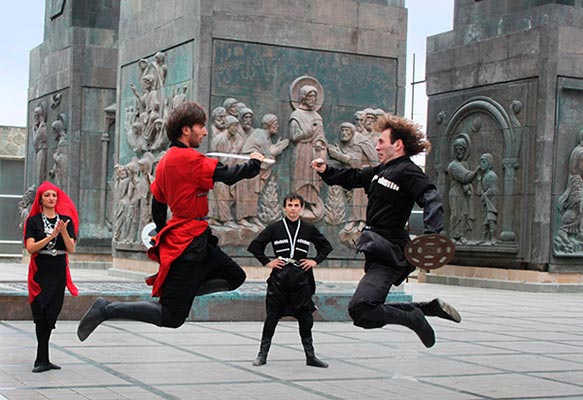 Culture of Georgia – this combination Georgian, Caucasian, European and traditions of the near east. The Georgian monumental architecture, music, the book miniature, the rich spiritual and secular literature, dances, works of jewellers, chasers and artists, and certainly the hospitable Georgian people, all it is a part ancient countries. XIX a century was marked by essential lifting of culture of Georgia, and also occurrence of the rich Georgian literature and science development.

Art of Georgia, as well as culture, leaves far in an antiquity. The ancient architecture of Georgia differs originality of natural beauty of caucasus, and also light of the mountain tops, blossoming valleys and abrupt gorges. The main feature of Georgia considers art of a stone laying on cement from carefully surface-tool shots. Silhouettes of churches differ the solidity, and smooth walls a carved relief decor and sometimes and colour details from stones of various breeds. In VI century in architecture of Georgia cross-dome types of a temple with four apses, named tetraconchal church and an octahedral drum of a dome on trumpet arches extend formed on hellinistic east. Such the well-known temple of Dzhvari (586-604), at merge of the rivers Aragvy and the Hen is constructed. The temple is at a stop a wooden cross “djvari”. Are known also round in respect of the church, blocked by a dome or a tent, with arcades inside. Time when was created by Shota Rustaveli it is marked by blossoming of art of an iconography, a mosaic, a fresco, a book miniature. An outstanding architectural monument of a mosaic and a fresco – a monastery of Gelati near Kutaisi (XII-XIV centuries). In this temple the rare Georgian manuscripts, metal products are stored in the technician of stamping with a common people and enamel. The beginning of XIX century is connected with conquest of Georgia, “Demon” is told about it (1841) against the Georgian landscape in A.S.Pushkin’s poems “Caucasian captive” (1820-1821) and episodes of a poem of M.Yu.Lermontov. Illustrations to Lermontov’s poem in 1880 belong to M.A.Zichi’s brush, he/she is the artist of a naturalistic direction. M.A.Vrubel in the illustrations to Lermontov’s poem transfers the Georgian life of the end of XIX century to Niko Pirosmanashvili – the layman, the first of primitives, has obtained after death a world recognition. Traditions of folk art were developed by L.Gudiashvili.

XI – XII centuries are marked by Renaissance of the Georgian state, this time when monks in academies, churches and monasteries put forward new humanistic ideas. The philosophy and a historiography, theology and the right, poetry and art developed in the Middle Ages in Georgia. The Middle Ages are marked by blossoming of architecture, astronomy, geography, the applied art, in particular, jeweler art and art processing of metal which are actual and today arises.

In V century BC there were first early Georgian literary monuments. The literary heritage of Georgia consists of an epic poem «the Hero in tiger skin» Shoty Rustaveli (XII century), the explanatory dictionary of the Georgian language (1716) Sulhana-Saby Orbeliani, Ilya Chavchavadze, Alexander Kazbegi’s products, Akakija Tsereteli, Galaktiona Tabidze, Konstantin Gamsahurdia, Niko Lordkipanidze, Michael Dzhavahishvili and Anna Kalandadze (XX century). Bright products of prose and poetry – a poem “Merani” of Nikoloza Baratashvili, 40 epic products of Vazha Pshavely («the Visitor and its owner», «Wedding of the dandy», etc.), «the wisdom and lie Book» Orbeliani, poems of Tabidze «Moon of Mtatsmindy» and «the Wind blows», and also short stories of Nodara Dumbadze – it the world masterpieces translated on various languages of the world.

Georgia is known for the frescos – wall lists VII-XIII centuries which have remained till our time in the Gelatsky temple, Atensky Zion, monasteries in Betanii, Kintsvisi, etc. special popularity were got At this time by the Georgian artists: Niko Pirosmanishvili (Pirosmani), GigoGabashvili, David Kakabadze, Lado Gudiashvili, Kornely Sanadze, Elena Ahvlediani, Sergey Kobuladze, Simon Virsaladze and Ekaterina Bagdavadze. The Georgian art distinguishes the refinement which has absorbed in symbiosis of local and European styles. 1920 is known for works of such artists, as Lado Gudiashvili, David Kakabadze and Elena Ahvlediani, working in Paris. World-wide known such sculptors of Georgia, as Elgudzha Amashukeli, Irakly Ochiauri and Zurab Tsereteli.

To the Georgian polyphonic singing 3000 years are approximately. Execution of the Georgian songs can be divided into three parts: top, average and low. The average part consists of a melody, low, i.e. bass supports this harmony little changes in a melody, and top, is sated by various melodious variations. By tradition, men and women sing separately and solely. The international organization of UNESCO considers inclusion of the Georgian melodies in the list of a non-material world heritage.

The conservatory in Tbilisi prepares fine executors of classical music. Among them it is possible to allocate Alexander Toradze’s pianists and Eliso Virsaladze, violin with Leana Isakadze, a bass of Paata Burchuladze, singer Nani Bregvadze, the pianist and music-master Manana Dojdzhashvili. In Georgia there is a national symphonic orchestra.

By composer Zahariem Paliashvili (1871-1933) has been collected a unique collection of the Georgian national songs, he has written music to operas «Abesalom and Eteri» and “Daisi” which have taken in a basis the Georgian folklore. Meliton Balanchivadze (1862-1973) is the author of the first Georgian romances and the first Georgian opera «Artful Tamara». The composer, the musicologist and ethnographer Dimitry Arakishvili (1873-1953) has become famous for a lyrical opera «the Legend on Shota Rustaveli». Modern composer Gija Kancheli is the author of an opera «Yes there will be a music», several symphonies and concerts, and also music to films and performances «Caucasian cretaceous circle» of B.Brecht, «Richard III» U.Shakespeare.

Thanks to the remained lists VII – XIII centuries in Atensky Zion, Betanii, the Gelatsky monastery and Kintsvisi now it is authentically known about cultural glory of medieval artists of Georgia. Names of the great artists who have brought the huge contribution to culture of Georgia are for the whole world known: Lado Gudiashvili, Elena Ahvlediani, David Kakabadze, Kornely Sanadze, Simon Virsaladze, Niko Pirosmanishvili (Pirosmani), Ekaterina Bagdavadze, Sergey Kobuladze and Gigo Gabashvili. Art of Georgia is so graceful that with a special delicacy and refinement combines the Georgian traditions and the European school. Not without reason the Georgian sculptors Zurab Tsereteli, Elgudzha Amashukeli and Ochiauri Irakly have brought the considerable contribution not only to culture of Georgia, but also to a world heritage.

V century AC – time of the basis of early monuments of the Georgian literature. The invaluable contribution is brought in formation of culture of Georgia and the national literature, in particular a poem and prose of Shota Rustaveli (XII century) with an epic poem “the Hero in tiger skin”,

Sulhan-Saba Orbeliani – the author of the explanatory dictionary of the Georgian language (1716);

Vazha Pshavel with 40 epic products (“Wedding of the dandy”, “the Visitor and its owner” and so forth),

These are recognised masterpieces of the literature and culture of Georgia.

The first film there was in Georgia in the beginning of XX century the Very first film has been removed in 1912, for this reason the culture of Georgia becomes among with the developed European states. The Georgian cinema has reached the apogee thanks to a number of outstanding film directors, it is Otar Ioseliani (“Favourites of the moon”), Eldar Shengelaja (film) “Shirekilebi”, Irakly Maharadze (“Horsemen of the wild West – the Georgian dexterous horsemen”), George Chheidze (“Pirosmani”), Tengiz Abuladze (“a desire Tree”, the trilogy “Entreaty”, “Repentance”).

The Georgian art still in ancient times left on the international level. Today art of Georgia is a cultural property of the whole world.