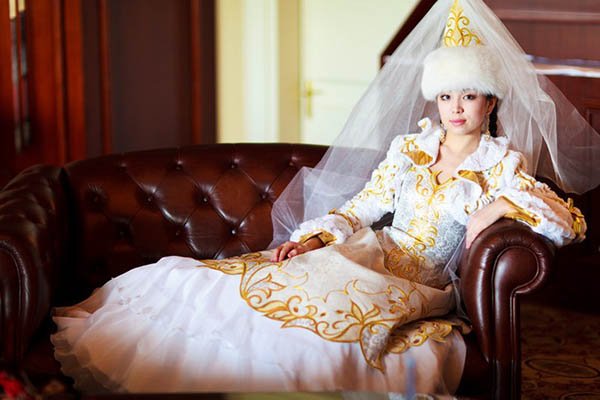 On the day of entry into legal marriage Kazakh bride is obliged to wear « sukele ». This hat, featuring a large height and a conical shape, is the most expensive article of any wedding ceremony. The upper part of the wedding hat decorated with the pen owl and placed on both sides of the different gems:

In decorating the headdress is actively used different small beads that hung on either side of the bride’s face, emphasizing her beauty. The upper part of the cap also was adorned with a lacy white veil, which was called « zhelek ». It veils the bride used to cover the face during the different wedding ceremonies.

In order to better understand the significance of the wedding bride’s cap, it is necessary to imagine a simple fact. The average « saukele » in those days cost more than the whole herd of the best horses. Equally valuable headdress married woman had the right to wear only until the birth of the first child. He presented with « kimeshek » After this, the bride of her husband’s mother. New headpiece accompanied by a woman before the end of her days.

The new cap was made of white cloth, covering a woman from head to chest. Typically, the front of the headdress was decorated using different embroidery, fine beads, silver jewelry, and so on. On both sides of a national cap was embroidered pattern. Rounding out the special turban headdress, which was created from a long white cloth.

« Kimeshek » fulfill an important social function, being certain passport that can tell a lot about a woman:

Cheerless fate awaited the women, who were not able to start a family. Until the end of their days, they were required to wear a girl’s cap. Thanks to this every passerby saw before him an unhappy lady who are not fortunate enough to find his one and only.

The most prominent Kazakh headgear is « saukele » – traditional women’s wedding cap. Despite the fact that « saukele » is produced on traditional canons, today it is impossible to find two identical bride hats. The basic principle of « saukele » – height, reaching in some cases, almost seventy centimeters. Height headdress directly dependent on the veneration of the ancestors of the bride traditions.

Also, « saukele » demanded of a young bride to bow deeply, entering the house of the future spouse, thus showing respect to the new house. With the traditional headdress of Kazakh bride is connected and another very interesting tradition. There is a belief that by touching with a bow cap « saukele » home hearth, a young bride would be the source of many benefits and long harmonious life in the family.

The head of the bride dress, made out of the highest quality and expensive fabrics, was the largest expenditure article of any wedding ceremony. Decorated « saukele » with precious metals and precious spun. If the bride was represented by a rich family, then it is always a headdress decorated with rubies, emeralds and so on. If the girl was from a poor family, in this case, she gave the last, so she can decorate her wedding hat. For example, it is not used the wealthy bride turquoise or carnelian.

Create « saukele » by hand. Professional seamstress used in the production of expensive furs and fabrics, and goldsmiths were engaged in the manufacture of small decorative items made of precious metals. Also, jewelers, based on an order made, can create a variety of artistic composition of the gold or silver jewelry.

Today we can confidently say that in the late nineteenth century, the cost of individual « sakule » caught up with the price of the whole herd of the best racers. The cost of that in our days may seem unreasonably high, it was the best sign in years. People then did not spare the money when the thing was really high quality. Even more surprising to his contemporaries seem that bought headdress Kazakhs never worn a second time.

Not gave the Kazakhs caps and do not take other people’s reproach. All this is a direct consequence of the features of national culture. It was believed that the cap accumulates not only the happiness of its owner, but also its problems. In Kazakhstan, it was not accepted to share these concepts.

There was a certain tradition associated with women’s hats. Immediately after the marriage the wife changed the traditional « sakule » on less lush « Kasaba ». New headpiece accompanied by a woman before the birth of the first child, and then gave the wife a mother daughter headdress « kimeshek » that stayed with her for a lifetime. Headgear completely covered the neck, the hair and the head of a woman.

National ethnographers have spent a lot of time exploring the features of Kazakh bride costume. It should be understood that any Eastern nation has invested in the traditional costume of a lot of sense, reflecting in it features of their culture. And costume Kazakh bride was no exception in this sense. Each element of this costume bears a special meaning, so the masters have always tried to come close to anyone, even to a small element of decoration.

Kazakh ethnography were able to establish that each wedding suit can be compared with a letter from a bygone era. His transcript helps to collect a lot of valuable information. Each suit includes several mandatory components:

Further study of the wedding dresses helped establish what Kazakh culture has the greatest variety of costumes, and so on. It fully holds true not only for the form but also the color of the dresses.

More recently, a group of Russian ethnographers managed to decipher the meaning of one of the wedding covered, which is known under the name « zhelek ». Here an experienced seamstress could not encrypt just wish the newlyweds, but this parable. In the central part of the composition is the house where the fireplace is lit, and over by the house bright sun shines. Near the house are walking black and white geese. Frames the entire composition bright rainbow.

Scientists have found that the skilled worker decided to give the young the importance of living instruction. Bride, making this day only the first steps in a new life, to become the protector of the home. Despite the fact that on the long path of life her family will be glad not only bright but also dark days, you must always believe that with the family will be able to cope with all the adversity. And one day on their home will shine a rainbow.

Despite all the efforts of local people to maintain the traditional wedding costume, Kazakh bride begin to increasingly choose European white wedding dress. It is believed that he came to the country only in the middle of the twentieth century. It is important to note that the color white is never quoted in the East. It was believed that it symbolized the sorrow and mourning for the dead. That is why the oriental bride opted for:

That black color is most often in the East tried to use the bride. The reason for that was his value associated with power and authority. Each clan had its own characteristics of the traditional wedding suit that allowed accurately distinguish it from a dozen others. Parents of the groom did not even need to ask the girl about her social origins, it was enough just to pay attention to her clothing style: