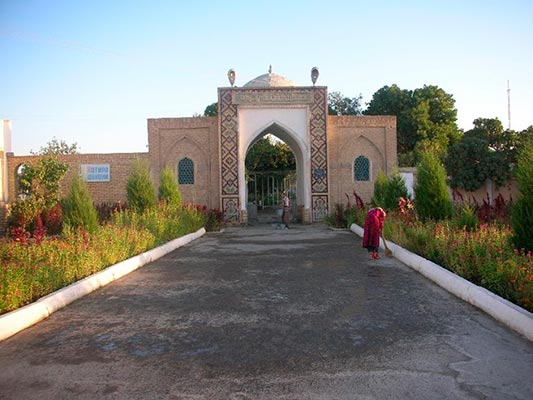 This tomb, located in the Bukhara district, was built in honor of the famous philosopher of the past Abu Hafiz Kabir In his youth, he decided to learn the basics of Sharia law and theology from the well-known at that time teacher Imam Muhammad al-Shaibani, who was one of the best students of one of the founders of the Sunni schools of law. The young man persevered in mastering the sciences and managed not only to pass all the exams, but also to become famous in the Muslim world as a theologian.

The theologian Abu Hafiz Kabir wrote many well-known books on the issues of Islamic law like:

Teaching activities of the Imam

After returning to Bukhara Abu Hafiz Kabir decided to actively share his wisdom with people. Thanks to his active position, he managed not only to raise the cultural and educational level, but also to make scientists and teachers really respected people in the society. Abu Hafiz Kabir founded one of the most famous Hanafi schools and a madrasah in Bukhara.

There are stories that survived till our times, which say that not only students from different regions of the country but also the Sheikh himself wanted to attend the school where Abu Hafiz Kabir led classes. During his teaching activity Abu Hafiz Kabir managed to raise a lot of outstanding scientists. For example, Imam Bukhari was the author of the canonical collection of hadiths known as « Al-Jami al-Sahih ».

Throughout his life Imam Abu Hafiz Kabir always tried to help people, regardless of their social status. All the townspeople knew that at any time he was ready to help not only in word but also in deed. For his boundless generosity and kindness Abu Kabir was called “Eshoni Hodzhat-“Baror, which means « one who helps solve problems. »

To meet the Imam, it was necessary to go through the gate, located in the north-western part of the fortress of Bukhara. Over time, this gate was given the name « Gates of Hakkrah », which means « the way of truth. » Later on the whole quarter started being called by this name.

People remembered the Imam after his death as well.

Unfortunately, in this world there is nothing eternal. In 832, the heart of the Imam stopped beating. Extant written sources say that Imam’s remains rest in Bukhara quarter « Hakkrah. » And today, the tomb of the scholar, theologian and the boundlessly kind man remains a place of pilgrimage for people from all over the country. Coming here people sincerely believe that any prayer here has a special power if it comes from the human heart.

The memorial complex built in honor of Abu Hafiz Kabir has the shape of a geometrically regular cube. The upper part of the mausoleum is decorated with the help of a dome of a spherical shape. Archaeologists say that this mausoleum is largely similar to the tomb of the Samanids.

The son of Abu Hafiz Abdallah ibn Abu Hafiz al-Bukhari also left his trace in the history. He helped Ismail Samani to ascend the throne of Bukhara. He also excelled in the study of secular and theological sciences.He happily shared the gained knowledge with people.

With the arrival of the Communist rule to this land, many historical monuments and sacred buildings were completely destroyed. A lot of graves befell the same fate. Only after the independence local authorities became actively engaged in the restoration of the tomb of the great Imam. Today, the mausoleum is not only a cultural but also a tourist center. Every year hundreds of tourists come here from different countries.