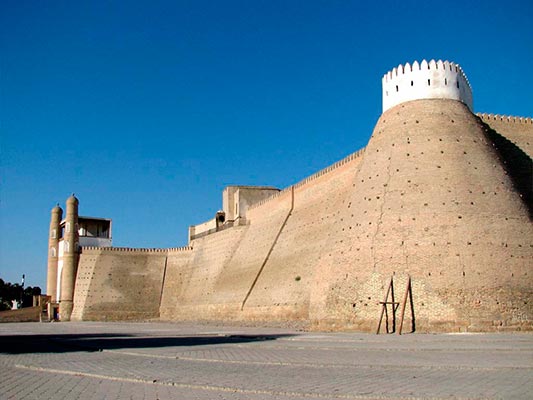 Not every architectural monument can be attributed to not only the major sites of historical and cultural heritage, but also to the recognized symbols of the state. Ark Fortress, located in Bukhara, is one of such. For centuries it has been the reliable support for citizens. Despite the fact that the fortress has for many years been a subject of interest of numerous archaeological expeditions, today there are still many mysteries enshrouding its history.

In the history of the fortress, there are many controversial issues.

Firstly, the debate is the date of foundation of the fortress Ark. Today there are more than four different versions, each of which cannot be fully refuted or proved until the end. The only thing that is beyond doubt in the scientific community is the approximate age of the fortress. Various written sources clearly indicate that 1,5 thousand years ago Ark fortress was already used as the residence of the governor.

Secondly, quite controversial is the technology used in the construction of the fortress. Some scientists believe that the chief architect already in those early years had used a variety of simple technical means. Opponents of the mechanistic theory don’t agree with this approach. They believe that the Ark fortress was built on an artificial hill exclusively by numerous slaves. Slaves were forced to work in inhuman conditions under the burning sun.

Since its founding the Ark played an important role in the life of the city. This is where the lord resided, ruling the entire country. Also, with the ruler of the fortress there lived the greatest sages of the time. They were:

There are several versions of the name of the fortress.

Today, scientists can not clearly explain the etymology of the name of the fortress. For example, the popular version is based on the famous legend of Siyavush, who was a positive character in many oriental tales. The lagend says about how Siyavush went on a long journey to get away from her evil stepmother. During his journey he managed to reach the gates of a very rich country located in the middle of the desert.

In this mythical city Siyavush fell in love with the daughter of a local ruler who decided to put a small condition to test the strength of the possible groom’s feeling to his daughter. The king, spread a bull hide on the ground and asked Siyavush to build a palace for her. The king demanded that no millimeter of the palace go beyond the boundary of the hide. The sly king did not know that Siyavush was not only handsome, but also very clever.

The young man cut the bull’s skin into many small patches, which he then tied together to make a circle. Inside the circle he built a fortress-palace, called the Ark, which became an ornament of Registan Square.

Today the fortress is a well-recognized symbol of not only the city but the whole country, but despite the illusory inviolability of the fortress, history has repeatedly tested its strength. Over the centuries, the Ark fortress many times was subjected to almost complete destruction and then rose again over the city. According to historians, the fortress, which can be compared with the mythical Phoenix is ​​the symbol of steadfastness of spirit and will for the victory.

In 1220 the inhabitants of Bukhara, trying to save their lives from the Mongol invaders, hid in the fortress. However, the nomads without too much difficulty took the fortress, killing everyone who was there. Bloody battles unfolded here during numerous revolutions and uprisings against tyrants. The discovered documents accurately assert that before the revolution in the fortress there lived more than two thousand people. This figure was significantly reduced with the occupation of this land by the Red Army.

The architectural features of the Ark fortress

Today the fortress is like a rather large earthen hill of rectangular shape with a little distortion to the east. Its outer wall is about 780 meters. The complex occupies nearly 3.96 hectares and the fortress dominates the square around it for nearly two dozen meters.

The central entrance to the area is decorated with 2 pole towers, the top of which is connected with a terrace with the help of a gallery. In order to reach the top of the Ark fortress, it is necessary to pass a large indoor track-type passage through the corridor toward the Friday mosque. On both sides of this track there are big railings. Directly from the gate of the fortress there is a large dark corridor, which includes:

1. A cell to keep prisoners;

2 Small rooms for the storage of sand and water;

Today, the eastern part of the fortress is transformed into a museum, which is also an architectural monument. It was here where Ulduhtaron mosque was discovered in good enough condition. The study of written evidence revealed that a sad legend is connected with this mosque. Ancient sources say that here four dozen women were brutally tortured and then all of them dumped into a deep well.

Also on the territory of the fortress you can find the sacred complex Jomi belonging to the nineteenth century. It is believed that the ruler lived there with his courtiers. The mosque also included numerous buildings of economic purpose, a bath and a mint engaged in the production of coins.