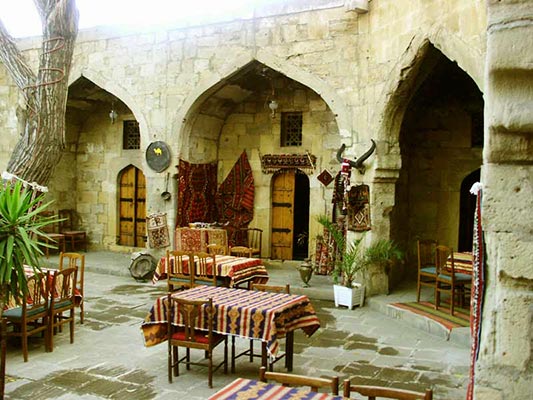 The caravanserai are the most important components of the Eastern architecture. Without these « pearls » of architecture it is difficult to imagine even one eastern city. But the caravan-sarai are not only attractions, they were the basis of the functioning of trade routes in the past, and were located at the intersections of roads stretching from the rich East to the glorified West. Tour operators of Azerbaijan always recommend to get acquainted with this unique phenomenon.

« Palace on the trade route » – so verbatim sounds the translation of the name of the social structure in the East, called the caravanserai. Most often it served as a resting place for people and animals outside populated areas.

The caravanserais built closed and open types. The closed ones served as defenses and were executed in the form of small buildings surrounded by a fortress. In the event of a threat to life, you could hide here and repel an attack or simply rest, leaving your horse in the pen.

The open caravanserais were radically different from the closed ones. They were the property of the cities and represented a sort of hotel, near which were built stables and special pens for livestock. For travelers there were created all the conditions for a good pastime: chaikhana, baths and other institutions necessary for the restoration of power. A good example is the Bukhara caravanserai, which lies in Baku. It can be seen in the architectural reserve, as the historians of the city of Icheri Sheher called, in front of Multani caravan-shed. Passing through the Shemakha gate caravanserai was built in the late 15th century. He was overwhelmingly a haven for merchants and travelers who came here from Central Asia, primarily from Bukhara, for which he was nicknamed Bukhara. Similar structures can be seen and during the rest in Uzbekistan.

An imposing and majestic view of the caravan-shed, made in the form of a square, is given by pointed arches. On the territory of the patio, adapted for rest, there were separate cells.

The Eastern portal, named « Murad Gate » named after Sultan Murad III deserves special attention. The portal refers to the structures of the palace buildings. In relation to the entire ensemble, the « Gate of Murad » is a relatively new structure erected in the 16th century during the Ottoman Turks’ seizure of the Turks.

The style of the Eastern portal is inspired by the beauty and sophistication of the Shirvanshahs’ palace and Divanhane. And yet it became a symbol of the decline of architectural art and, consequently, the ornamental skill of Azerbaijani virtuosos. This can be determined by the low-quality stone from which the portal is made. The reason for this – the prolonged turmoil due to constant military incursions into the territory of the peninsula.

However, these factors did not prevent the « Gates of Murad » to become the greatest work of architecture, interest in which from year to year only increases, capturing the glances of travelers around the world.

The exact name of the author of this architectural miracle is for certain unknown, it is only known that the « Gates of Murad » is the creation of the hands of the architect from the city of Tabriz.

« I ordered to build this noble building, in the days of the reign of the fairest and greatest sultan – Murad, Ulu Rajab-baba Bakuiyi in 994. (1585-86). « Thus, in Arabic, the inscription on the top of the portal says. The « Gate of Murad » from the other buildings of the palace are distinguished by a spacious entrance opening reminding the gate, which is clear from the name itself. According to the assumptions of historians, this place was the entrance to the structure, which either was lost or was not built. Excursion here can be booked in one of the hotels in Azerbaijan. By the way it is not expensive, it can be included in the plan for a cheap tour.