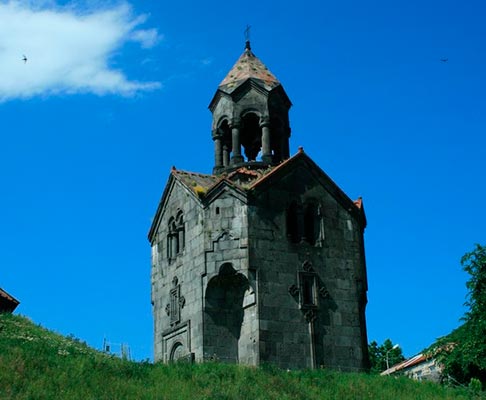 Not far from the small village of Alaverdi grows dark gray stone walls of the Monastery of Haghpat. This is a true island of the Middle Ages, covered in soft spurs of mountains, picturesque arches were amazing, complex, exquisite carvings, carrying away the mysterious passages and striking shady, heavy freedoms. The monastery operates to this day, though not as large and populous as in past centuries. And once I knew Akhpat really nice days, and was one of the mainstays of education, the arts and the study of various sciences. Armenian tour operators recommend to spend a day on this trip.

The whole ensemble looks surprisingly harmonious, and the buildings themselves skillfully and delicately placed on a relatively small area. He looks like a single entity, an ancient living creature that is comfortably curled up on top of a hill, exposing the gray sides of the sun caressing Armenian

Due to the unique cultural value and unique appearance, embody the traditions of Armenian architecture, the monastery was lucky enough to enter the UNESCO list and become a World Heritage Site. This decision was taken in 1996. No wonder it is included in most tours in Armenia .

The first buildings appeared here in the end of the tenth century, when during the reign of Ashot the Merciful here it was decided to found a monastery. For the monastery was chosen a small hill, which from the harsh outside world advocated steep spurs of the gorges. Perhaps the monastery would not have happened if not for the queen Hosrovanush, wife shahin-shah Ashot the Merciful, the devoutly Christian. The monastery developed rapidly, changing from a humble abode in the strongholds of faith and education, which helped a lot of his wealth multiplies extensive grounds. Even a century later a modest settlement was not found. Vodinnadtsatom century on this earth a solemn consecration of the new Catholicos of All Armenians. By the middle of the twelfth century Armenia was fragmented into multiple domains, and a monastery, so could be a spiritual center, if not the entire country – that in this region, then called Lori kingdom. There even was posted tomb, where his final resting place was found by local rulers – a very honorable role. The very grave, it was decided to transfer from the nearby monastery. It was in this period weakened by fragmentation Armenian land became too strong and incessant attacks of the Seljuks loot, leading to disappointing results. Lori kingdom ceased to exist, and freed from the Turkish yoke of Georgian forces already lord of David the Builder, that happened quite quickly – Turks expelled six years after their accession. After the liberation of Haghpat he has still not owned by the royal family and was occupied first kind Artsrun, and then moved on to Zakarian. By the fifteenth century in the monastery there is a new interesting form of government in which the abbot joined together in a single face and a spiritual and worldly power, that is the prince. However, in the period from the seventeenth to the eighteenth century paron-panthers, namely the so-styled rectors, mostly lived in Tiflis. In the monastery lands was restless – is now live and is not interested in peace it showed Lezgins. However, their cultural and spiritual role of this monastery is not lost, and in those years, it is often chosen as a permanent abode of his poets, writers and painters. In the twenties of the nineteenth century Haghpat even for a short time it has become a haven for the Catholicos, as the complexity in the relationship between the Iranian authorities and the Russian Empire began to threaten Echmiadzin Monastery. The decline came to the monastery only at the beginning of the twentieth century, when Akhpat lost most of its land holdings and the surrounding villages, and the inhabitants of this holy place gradually began to leave his home. The monastery has once again become current in the second half of the twentieth century when Catholicos Vazgen I. Thus began the history of this temple complex is not so sad, like many of his colleagues in Armenia, and to this day he came in almost perfect condition.

The monastery complex includes a lot of buildings, and not only the Church, but also intended for mundane activities. The oldest and perhaps the famous building on the temple grounds – is the church of Surb Nshan (translated into Russian – Holy Sign), which was founded more queen Hosrvanush at the end of the ninth century, and later only supplemented by small additions and new interior details. It is worth to admire the paintings made in the thirteenth century in the altar room, and amazing in its mastery, carved sculpture of the Blessed Ashot sons. The rest of the monastery hid behind the ramparts in the 13th century, when Prince Zakaryan feared for the safety of the holy things, and the brothers found here. Perhaps because of this decision prudently extant church building of St. Gregory the Illuminator, a small temple of Surb Astvatsatsin, kind of tomb Ukanyants, library and refectory. Immediately located and the largest in Armenia gavit building similar to the porch in the Orthodox Church. Most of the buildings have been gutted or partially redone in the 13th century. Amazing for its beauty building – this is a high bell tower, which was modeled on similar erected many buildings.

The monastery was known not only for its rich land, but also the wise brothers who lived in these lands. Until the fifteenth century, there pored over tomes some of the best copyists Armenia. And exceptional copying of texts in Haghpat are not limited to, then we tried to recreate the ancient manuscripts, partially lost, and were given different interpretations written. The monastery library was one of the richest collections of ancient chronicles and texts, mainly belonging to the Armenian authors. However, when the raids began to thicken, for the preservation of handwritten treasures were transferred to the next cave, where he arranged the reading rooms. It has survived only twelve medieval texts, among which and has a unique value Mugniyskoe Gospel. All of them are now in the Matenadaran (Yerevan). Perhaps one of the caves near the monastery and still keeps the rest of the manuscript was considered lost. In addition, the Haghpat and was one of the strongest schools in these lands. It not only taught theology and philosophy, but also grammar, music and painting. No wonder Akhpat known for his thumbnail.

Arriving here is best in the summer or fall, when the surrounding fields and hills bloom saturated colors, turning in a generous frame of strict and harmonious lines of Haghpat. Slate color against the backdrop of the lush riot of colors writes its elegant appearance medieval monastery. Not far from the hotel is a few Armenia hotels.