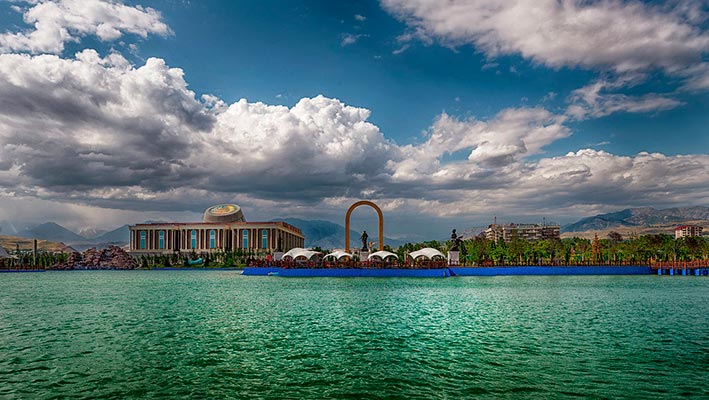 Pamir it is not simple mountains, these are high mountains. The highest top of Pamir reaches 7499 metres above sea level, and the pass Ak-baytal on road Osh – Khorog is located at height of 4655 metres. For comparison we will tell that the highest point of mountainous Armenia – mountain Aragats reaches only 4090 metres. But Aragats without climbing preparation and equipment you will not climb up, and through Ak-baytal the road on which cars go is laid. Ninety three percent of territory of Tajikistan is occupied by mountains so it would be just right to give more geographical, than administrative borders of the country. From Pamir – «world Roofs» the highest in the world ranges disperse, including Karakorum and the Himalayas in the south, Hindu Kush in the west and Tien Shan in the northeast. And frontiers separate Tajikistan from Afghanistan, Uzbekistan, Kyrgyzstan and China. Tajikistan is one of the oldest states of the world. Its history is closely connected with history of neighbouring countries of the Central Asia. In territory of modern Tajikistan, according to scientists, in the middle of II millenium B.C. the semilegendary Ariana occupied by Aryans settled down. These earths were included into the most ancient states of Sogdianas and Bactria. In VI century B.C. the country has been grasped by power of Ahemenids. However after two centuries the Persian state has fallen under blows of armies of Alexander the Great. And today in high-mountainous Tadjik kishlaks it is possible to meet blue-eyed and fair-haired inhabitants – descendants of Macedonian soldiers. The Greek-Baktr kingdom which has arisen on ruins of empire of Alexander the Great, has been subdued by a tribe of tohars, formed on territory of Tajikistan, the state of Toharistan. In I century B.C. Toharistan was a part of a powerful Kushansky kingdom, and after its disintegration in III century Sogdiana and Bactria have passed to the power of Sasanids, then Turkic kaganate. On these earths a Lazurit way, on which this valuable stone from Badahshan was delivered to Persia, Egypt and India, layed a millenium ago. Here sites of the Great silk way passed. One of caravan roads conducted from Kashgar through mountains Karakorum in Hodzhent and Pendzhikent and further to Fergana valley and Samarkand. Another – through Regar to ancient Termez and Balh. In the beginning of VIII century an army of the Arabian Caliph under leadership of Kutejbu ibn Muslim have won Sogd. Arabs have eradicated zoroastrism and the Buddhism, occurring among local population, and have made Islam – the state religion, and Sogd language has been forced out by language – Dari.

Conditions here the severe. And if in fertile valleys grow up grapes and a fine-fibered cotton on rare mountain sites – dashts, suitable for agriculture, sow early ripening varieties of a rye, barley, peas. And soil on dashts deliver baskets. Here, on rags of pastures, thousand yaks are grazed. They are unpretentious, cold-resistant», all year long spend open-air.

In one of Pamir gorges there is «a ruby mountain» Kuhi-Lal. Lalami, as well as sapphires, in olden time named rubies which extract now by means of modern mechanisms. And in a valley of Shahdary deposits of «a heavenly stone» lazurite are glorified. The mine is located at height of five kilometres, and the extracted lazurite take out by helicopters.

Khorog decorated with poplars – the centre of mountain-Badahshansky autonomous region is located at height of 2200 metres. And on hundred metres above over Khorog the most high-mountainous is created in the world a botanical garden. Between Khorog and Dushanbe is laid the Pamir path on a place old caravan roads. Earlier this way occupied from travellers about forty days, and now the plane overcomes it for forty five minutes. However, this way is connected with exciting sensations when the crew should repeat whimsical bends of gorges, especially before decrease in Khorog. The most complicated on a profile still has also a highway, with eleven passes both dizzy streamers and eaves so ancient inscriptions on rocks «the Traveller are involuntarily remembered, be careful! You here as tear on an eyelash».