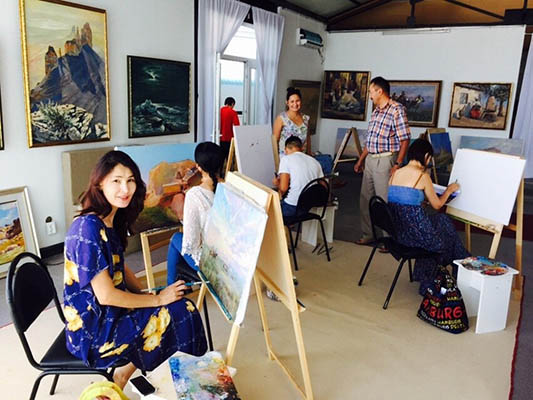 Natural Beauty Almaty delight the eyes of ordinary townsfolk, and people generously endowed with the gift of fine art, inspired the creation of magnificent paintings, which are entered in the century elusive transparent beauty of mountain meadows and overwhelming grandeur of the mountain peaks. Aromas of sweet herbs and bright paint colors: blazing saturated scarlet, leaving in blue, poppies, delicate white snowdrops and intense blood-red velvet pions, live and tremble at such famous paintings as «At the top», which was painted by Nicholas Kludova, or » Panorama of the village of Malaya «, written out Abulhanom Kasteev. More recent works, filled with the breath of time and carrying greater realism – a «queue at the funicular», the picture created by Eugene Sidorkina and owned by Dmitry Kalachev «New TV Tower.»

The surrounding scenery served as an inexhaustible source of inspiration for the creators of Cinematographers. With sensitivity and tenderness they imprinted elusive fragile beauty of Almaty on the film. So there work Eymanova S. and A. Nagmanov, «Our dear doctor» and «Welcome to the Alma-Ata», respectively. His image of the city tried to capture Ya Sika in the movie «The mountains and the city.» A hymn to the night Almaty composed V. Tatenko lovingly creating «Lights Evening Almaty».

And how many sincere love for Almaty and admiration of her floating in the fluffy clouds apple tree flowers and sincere respect to the spurs of the snow-capped peaks of sounds in each stanza soulful and endearing clean notes of song «My City» and «Alma-Ata», emerged from the pen B. Yerzakovich, the famous composer. Rhythms panoramas, delicate smoothness gardens and soaring crescendos sharp mountain tops, woven into the melody mesmerizing waltz «Ahnaly Almaty», woven sensitive ear Aset Beizenova.

Could not leave indifferent the local beauty and poets. On the thin music of words charm of the city and its environs suffered Dmitry Snegin and cooking with Tahir, in his works «My City» and «flow.» And the monumental beauty appealed to the appropriate form, but because it is not just lyrical works and poems.

Surrounding the monumental landscapes gave a strong push and philosophical thought. When looking at the indestructible rock, and at the same time, feeling the earth tremors, many scientists wonder about the futility of all the material, and that one day even the great examples of human civilization can fall, and at the hands of the people themselves. Here he taught and wrote one of the most prominent representatives of the Russian flow cosmism NF Fedorov, who at the beginning of the 20th century even published the famous book «The Philosophy of the common causes.»