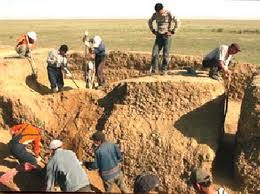 The centre of the complex is formed by a temple with a square yard and 19 premises along its perimeter. Along the walls of the yard with the remnants of murals runs as a «sufa» (raised platform) with a colonnaide. In the south-western part of the yard stands the shrine. Near the entrance there is a painting of a Buddha’s head in a halo. On its right it is flanked by small figures of standing and sitting Buddhas, monks and laymen, and on its left – by figures of local deities coming toward Buddha.