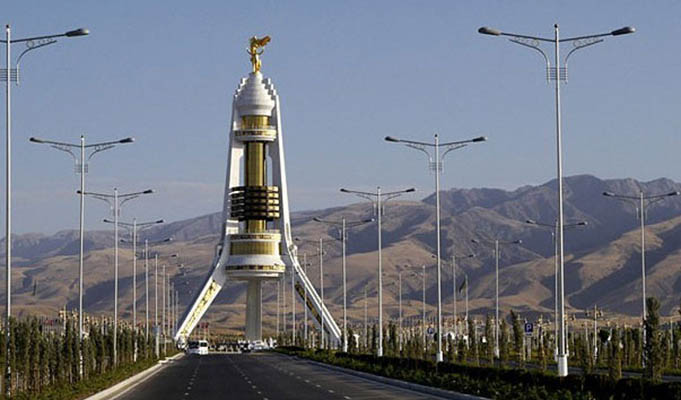 On a central square in the capital of Turkmenistan was placed once famous Arch of Neutrality was built there 12 December 1998. Numerous tourists and residents of the city called the monument, based on the features of its appearance, the „3-foot“. The total height of the monument to the Turkmen state, next to which there are many hotels in Ashgabat, is about eighty meters.

The construction, establishment of Turkish architects on three pillars, is a monument, which includes several levels. The logical conclusion of the monument is a huge statue of Turkmenbashi, exalted to the heavenly luminary hands. The height of the monument to the leader of Turkmenistan is about twelve meters. Turkish architects have provided here a special mechanism by which the Turkmenbashi statue rotates, following the sun, making at the same time every 24 hours full circle. Today, the monument is located in a static state of being to orient the face of the city.

Each element of the monument is of particular importance

Not only the monument itself, but its decor can form an idea of ​​the guests of the country on various aspects of the country’s history. For example, the lower part of the monument is decorated with bas-reliefs of all kinds, reflecting the different events and personalities of bygone years. If we look at the vertical part of the monument, then you can find 5 rings, indicating that five of the Turkmen tribes. All of the above rings encircling the monument, decorated with patterns of traditional Turkmen carpets.

History of the National Monument

The builders have done everything possible to make this monument of national statehood became really popular not only among tourists but also locals. For example, the entire area around the monument was completely rebuilt. Today you can find plenty of cafes and shops. At night, the entire complex is lit in a special way, so that the area takes on a special flavor.

The idea of ​​building this monument occurred in December 1995, when the international community has recognized the neutral status of Turkmenistan. The country’s authorities have decided to focus on domestic developments than to risk taking part in various local and international conflicts. With these ever since November 12 was celebrated as a national holiday – Neutrality Day.

In 1996, the President ordered large Turkish company to develop the project and to begin construction of the monument. Exactly 2 years builders proudly reported on the work done. The official opening of the monument took place on the central square of the capital of Turkmenistan.

Every year a lot of tourists visiting a monument have chosen the last minute tours to Turkmenistan. Especially for them, this monument has been equipped with several observation decks located at various levels. Using a comfortable lift, you can get the opportunity to enjoy breathtaking views of the city.

In summer 2010, the monument was decided to remove to a year again to put it in the southern part of the street Neutrality, which is not far from the Kopet Dagh. After moving into the space of the monument height increased to ninety-five meters.