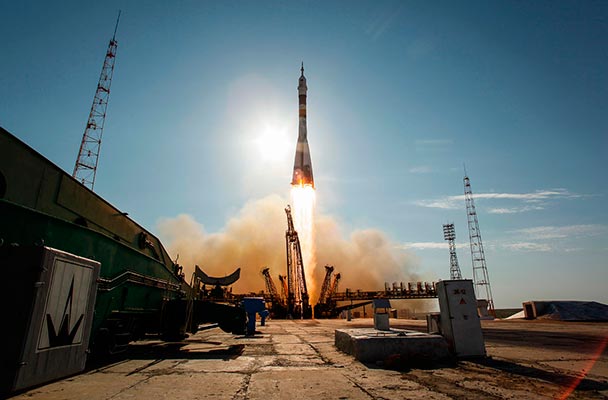 In the beginning no one could have thought that this is strictly secret launch site will be subject to the world’s scientific heritage. In those early years, the word „Baikonur“ did not exist in the language. The architects chose to call the object „experimental range.“ There is even a legend associated with the construction of Baikonur. When the famous Sergei Korolev was asked what will be built here, he answered without hesitation: „the world’s largest stadium.“

Baikonur began to build in the period of „cold war“. At this time, the two powers tried constantly to get more different weapons, believing that because they are able to protect themselves from possible attacks. A striking example of this arms race can be considered the first Soviet nuclear bomb test, which took place August 12, 1953 at the test site in Semipalatinsk.

Grand devastating effect not only had to be a deterrent to the „cold war“, but also to help domestic rocket. Sergei Korolev then invited to discuss the possibility of creating a missile capable of carrying long-range nuclear warhead. The prototype of such a missile was the R-7.

In 1954 Zhukov gives the order to find a well-equipped location, as it was then called „the experimental range“, which could be on a regular basis to test missiles. Selection of military officials and scientists fell to a subtle point on the map, which was the town of Tura-Tam. The military immediately recognized the enormous potential of this point on the map. Firstly, the town was virtually invisible to foreign intelligence. Second, the next there was no social facilities, so you can not worry about the resettlement of civilians.

His official job spaceport began to test R-7 rocket, which is held August 21, 1957. The success of the first rockets forced scientists to continue their research, which culminated in the October 4, 1957 launch of the first artificial earth satellite. This event helped to rename the „experimental range“ in the Baikonur cosmodrome. The first manned space flight, which took place April 12, 1961, Baikonur made ​​a real center of national and world cosmonautics.