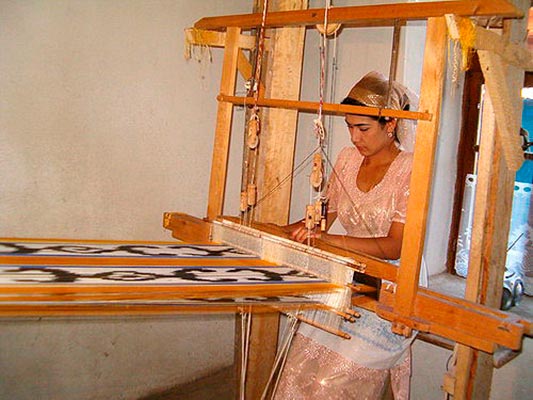 Silk – one of the most expensive materials – is famous for Margilan, which is located in the Fergana Valley. From generation to generation, hereditary weavers created truly unique masterpieces that were very popular and worth a lot of money.

One of such hereditary families is widely known, whose head, as well as the master-abrband, is Turgunbai Mirzaakhmedov. He made a great contribution to the development of the hand weaving factory Yodgorlik, being the developer of more than one hundred original patterns for fabrics. His talented hands revived the traditions of weaving of such materials, the production of which was forgotten and practically lost – shoi, adras, bekasab, banoras. Any of these tissues were created by 38-step processing, which was a laborious and rather complicated process.

Supported the craft of his father and son of Turgunbai – Rasul. With the same love and devotion to his work, he helped his father in his difficult work, by joint efforts creating new colorful patterns, which have no analogs anywhere. Perseverance and dedication of Rasul allowed him to save and revive another forgotten material – ala-bakhmal. Previously, this fabric was used exclusively for rich, expensive outfits, which only well-off people could afford. Well-known collector Goldman, was the only person in the collection of which preserved a cut of such exquisite material.

The hospitable hosts are happy to share not only the already created silk fabrics, but also the production process itself. In their house you can always enjoy not only unique handicraft specimens, but also the most delicious traditional cuisine, having stayed at a famous family for a few days. Accommodation, which also includes family dinners and dinners, will cost $ 25 per visitor per day.