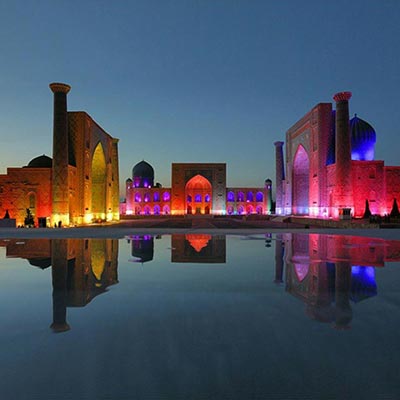 Registan considers as a main square of Samarqand from the 14th century. Its meaning is „a sandy place“. Before building and giving name to construction there was a channel flew forming sand and silt deposits. There are six streets intersected at Registan. While Temur was governor, that square was a merchant and trades center, but during Ulugbeg’s government it became a spiritual centre. Ulugbeg constructed majestic Madrassah and Sufi khanaka with a huge dome. The old constructions of Registan had fallen into disrepair condition by the end of 17th century and the governor of Samarqand Yalangtush-biy ordered to found new buildings such as: Sher-Dor Madrassah in place of Ulugbeg’s khanaka and after some time Tillya-Kari Madrassah.