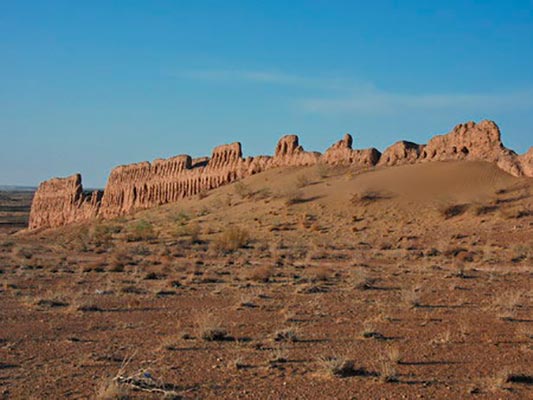 This fortification was built on one of the steep slopes of the north-western part of a large hill. If you look at the entire building from a height, it is easy to find its similarities to the classic rectangle, the corners of which are stretched strictly on the four sides of the horizon.

Architectural features of the military fortress

The total area of ​​the building is about 200 meters by 170 meters. The height of the internal and external walls exceeds almost ten meters. In order to enhance the defense capability of the complex the architects had made the decision to build an additional wall, dubbing basic one. These walls were equipped with small loopholes that allow to fully apply it to the military buildings.

Archaeologists say that the fortress was preserved very well till our time. The reason for this can be found in the fact that nature for many centuries kept quiet of the whole structure. For example, huge sand dunes didn’t let the forces of nature have their devastating impact on the entire complex.

Unlike other similar structures that can be found in this region, Janbas Kala had no defensive towers at the corners. This feature as estimated by domestic and foreign experts is not quite typical for the architecture of the East. It should be kept in mind that there existed a special near gate structure, allowing the soldiers in the fortress,to conduct aimed fire from the battlements.

General layout of the entire complex features a poor decoration and the lack of any architectural excesses:

Today, scientists can say with certainty that this fort was laid during period of the „1000 cities“, which is divided into two parts:

Stages whose names reflect the names of states of which the settlement was part, fully allow us to judge about the rapid development of the whole complex. The first stone of the complex was laid during the first of the above periods. National historians could fix the approximate date of the foundation of the fortress dating from the period of the fourth century BC to the first centuries AD.

For centuries the complex successfully repelled attacks of nomads, but in the first century AD fortune turned away from defenders. At this time armed nomads acquired a “ram”, which was used to break the western wall of the fortress. As a result of the bloody battles part of the residents were taken into slavery, while the others were brutally murdered. Over the next two centuries, the fortress was gradually destroyed.