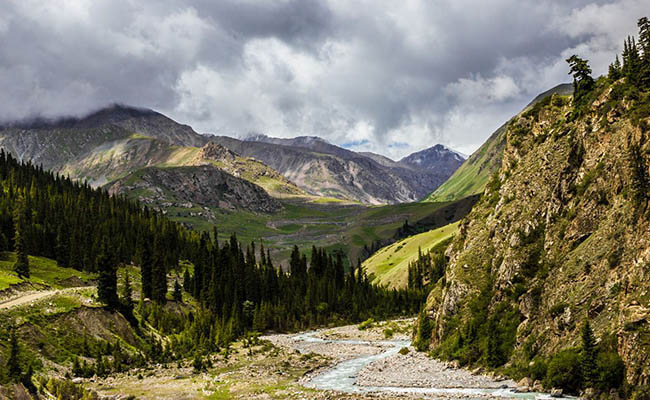 Fans of various canyons can satisfy their cravings for Exploration of the unknown in Barskoon, which is located on the scenic shore of Lake Issyk-Kul. The length of the canyon, which is located in the floodplain part is almost 10 kilometers. One of the „business card“ of the canyon are its unforgettable waterfalls, the most famous of which is a fascinating name „Tears of a leopard.“ Among other famous waterfalls are the following:

With one of the waterfalls connected whole legend. It is believed that the famous Manas, who wanted to quench his thirst, he decided to drink water from the lake. When he scooped up a cup of water, a trace formed in the rock, reminiscent of his form this cup. On the validity of the legend can argue for a long time, but all the local streams are distinguished by one truly unquestionable feature – they all contain lots of gold particles.

When driving on the road, you can find a few monuments belonging to various epochs more:

Archaeological expeditions were able to find the ruins of many settlements that were used to service the Silk Road. All travelers on their way to China, will certainly pass through the Bedel Pass. As a result of a long study it was found that the settlement existed here from the eighth to the twelfth centuries. In the eastern part of the mountain settlement was Sitir that can be translated as „cold desert, located high in the mountains.“

In the days of the Soviet Union it was a trail eastward along the flow of the Naryn River, bypassing the pass Ishtyk and Ak Shirak. Then, the road once again came to the town of Karakol. Unfortunately, many sections of the route were destroyed by the impact of time and the elements.

Since these places are closely associated with the names of many historical figures. For example, Mahmoud al Kashgar, gained fame under the pseudonym Barskhani, was born here. His name many people associate with one of the most complete Turkic dictionaries created in 1072. The place of his final resting place was the southern part of Kashgar, located near the highway leading to Pakistan.

In the 11th century, was born here scholar Mahmoud al Kashgar (Barskhani), who became famous as the author of the first dictionary of Turkic languages ​​(comparative), written by him in Baghdad in 1072-4 years. In his world map, Barskaun was at the center of the world. His grave is in the south of Kashgar – on the way to Pakistan.