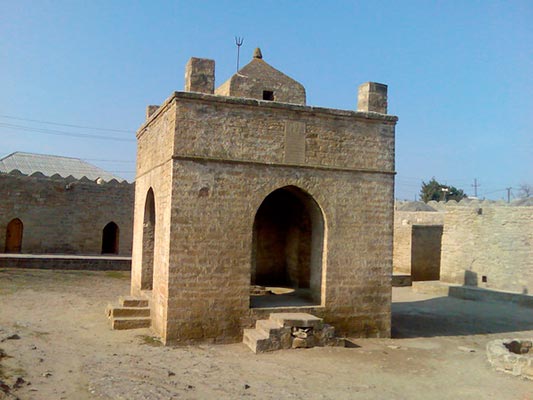 Dangers and secrets, secrets, the spirit of antiquity and charm, the „Black City“ of Akunin, the city of oil and gas is the city of Baku. Tour operators of Azerbaijan with pleasure use all these myths to attract travelers here. To imagine the life of the Azerbaijani capital in the beginning of the 20th century, allows us the work of Boris Akunin, in which the surroundings of the city of Surakhany are accurately described. The settlement was founded in the middle of the 19th century and is located 30 km northeast of the capital. The neighborhood of the village has long been famous for oil wells, and due to their existence, local residents called the village a „hot house“ (in the translation from the Tat language). The oil boom touched the village in 1850, when oil and geologists from all over the Empire began to arrive in Surakhan. This year gave a new starting point for the historical existence of the village. Each new deposit was marked by enthusiastic joy.

The first oil refinery in the world was built on the territory of the village in 1857. The idea of ​​constructing the plant belonged to entrepreneur Vasily Kokarev. From historical facts it is known that Dmitri Mendeleev himself worked as a consultant. But the main purpose of visiting Surakhan is for tourists Zoroastrian temple of Ateshgah fire admirers, since dusty streets for exotic excursions do not cause particular enthusiasm with the protruding oil rigs. The temple, built on the site of „eternal fire“ (combustible gas comes from under the earth), has been attracting fans from all over the world for centuries with its unquenchable fire. The world is endlessly changing, centuries pass, and the temple, illuminating the suffering Divine path, irrevocably stands still. This holy place is revered from century to century by Hindus, Sikhs, Zoroastrians. But now ordinary travelers come here as part of the tour of Azerbaijan.

The temple attendants were, in the main, Hindus. The structure is a form of „chahar tag“, consisting of four arches, located on four sides of the world. It was built in 2-3 BC, when the Zoroastrians dominated in ancient Azerbaijan. With the adoption of Islam, the population of the territory stopped attending the temples of fire and they gradually deteriorated. But at the temple Ateshgyah another fate, thanks to the Great Silk Road, which passed through the territory of the Great Eastern State of Azerbaijan. On this way, pilgrims from Persia, India and a number of other countries of the East came to the temple of fire worshipers. The attendants of the temple (parsa (Persians), gabry, maji (mages)) are mentioned in the works of the great French writer of the 19th century, Alexandre Dumas-father. Some cells of the temple have a sign above the entrances, on which Persian, Sic and Hindu inscriptions are considered. There are 17 of them. In the temple of fire in the middle of the 19th century the layers of earth shifted, blocking the escape of natural gas. For pilgrims this catastrophe was perceived as a sign of punishment of the gods. The last Hindu, left after the disaster, left in 1880. walls of the temple and went to India. The temple was empty. And only in 1975 it was opened for visits after restoration works. It becomes a museum complex, taken international organization Unesco under protection.