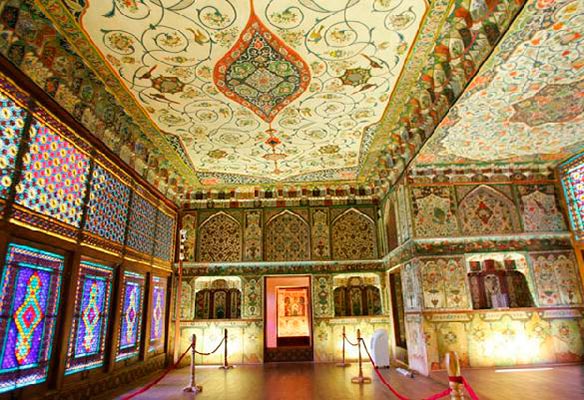 Their doubts were groundless, but it’s easy to understand the researchers‘ concern – the beauty of the palace was striking to the heart, and any change here seemed a real blasphemy. The building itself is charming with very modest dimensions – a kind of casket 32 ​​meters long and 8.5 meters wide. The Sheki khans, evidently, were satisfied with very modest squares – they had only six rooms, four corridors and a couple of balconies, but in their desire to decorate the dwelling their ambitiousness truly knew no bounds. First of all, the beauty of the palace windows, elegantly made up of fragments of colored glass and taken in fanciful patterns with thin frames of stone bindings, are striking. You will not see this on holiday in Uzbekistan.

The facade itself is decorated with beautiful paintings depicting truly male scenes of hunting and war. Inside, each span of space is painted with patterns, mosaic, bent by a whimsical line or blossomed by an exotic flower. The main color, which generously applied to the creation of their masterpieces artists, noble gold, but the space is generously nourished and saturated with blue, and yellow, and purple. The main theme is a floral ornament that frames scenes from the life of khans, depicts images of birds. One of the most famous frescoes is a peacock (revered as a sacred bird) near the „tree of life“.