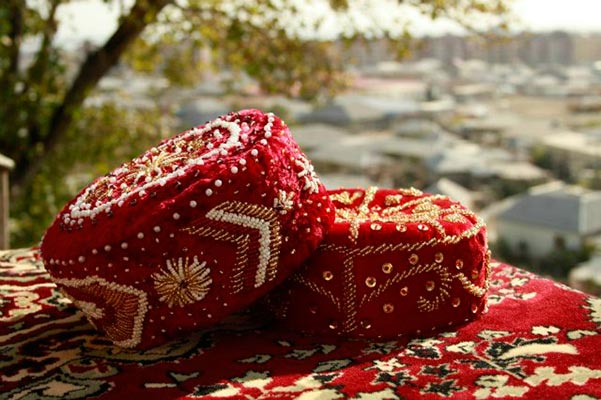 Azerbaijani embroidery belongs to one of the most ancient kinds of not even handicrafts, but the true creativity of the people. The most luxurious hotels in Azerbaijan, and many other countries would like to decorate their walls with such canvases. It shows a rich spiritual world and talent of Azerbaijanis.

Technical compositions of Azerbaijani embroidery are rooted in the depth of centuries. Archaeological evidence indicates the beginning of the spread of various types of embroidery in Azerbaijan. Ceramic vessels created in the Early Bronze Age (the third century BC) reflect in their drawings elements of ornaments such as embroidered: broken and straight lines, zigzags, rhombs, circles, dotted ornaments, etc.

Wealth and variety reflected in embroidered products. Ornamental motifs contained the most popular images of flowers, fruit trees, leaves, ears. Rhombs, asterisks, triangles, six- and octagonal rosettes, the sun reflected in geometric patterns of embroideries. Without attention, there were no images of such birds as a nightingale, a peacock, a pigeon, a parrot, a sparrow, a pheasant, partridge, and others. Also skilled needlewomen embroidered representatives of the animal world – turtles, gazelles, horses, snake dragons, etc. Reflected in the patterns of household items, such as decanters for rose water, elegant and mysterious cases for combs, jugs, bottles.

The most ancient embroidery in Azerbaijan is gold embroidery. For work used dense fabric, the best of which was considered a solid velvet of green, burgundy or red. They also embroidered on brocade, morocco leather, satin and cloth of various tones. In embroidery with gold embroidery, factory threads of gold or silver were used. Gold embroidery decorated headdresses, women’s clothing, small and household products, as well as horse decorations. The dowry of the bride, according to the customs, was to have items embroidered with gold. Tambour embroidery was executed with bright silk threads on a cloth of red, dark blue or black colors, or on velvet. This kind of needlework was practiced by both women and men. Complex and bizarre patterns were created on the fabric, which before that was stretched on the embroidery frame. The master initially embroidered a clear outline of the contour, and then moved to the inner part of it. The tambour seam decorated women’s clothing, bedspreads, bath mats, pillowcases.

For embroidering with smoothness, soft, pastel tones of silk and wool thread were used, often combining with gold threads. This technique was embroidered with wall decorations, it turned it into works of art covering for the face, curtains, clothes. The most interesting are pearl and beaded embroidery. They decorated items of clothing, household items and much more. Sequins, as one of the types of embroidery, were sewn along the contour of the pattern on the fabric with silk colored threads. Applicants and embroidery are considered to be younger than Azerbaijani embroideries.