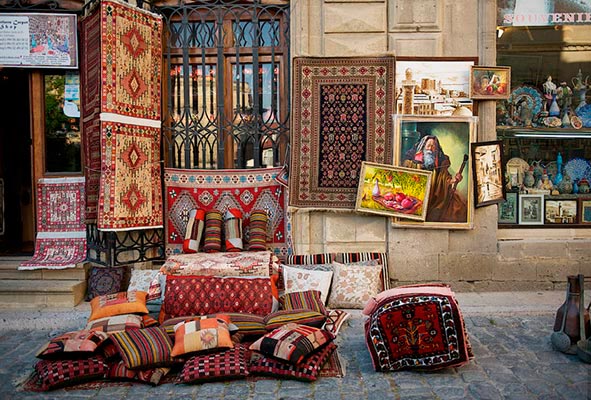 It is impossible to describe the Azerbaijani carpet in two words. This is a whole artistic work, in which the multicolored nature of the ancient eastern state is imprinted: the celestial blue, forest greens, the whiteness of snowy mountain peaks and the velvet emerald shadow of the thickets on the slopes. Ruby colors of pomegranate seeds, lilac shades of grapes, golden quince are intertwined with extraordinary patterns. Some unique samples can be seen not only in museums, but also in hotels of Azerbaijan.

The art of Azerbaijani carpet weaving originated in ancient times, as is known from the monuments of literature and archaeological research. Carpet weaving of Azerbaijan is the oldest kind of decorative art, which was praised in folklore, classical literary and historical works.

Carpet weaving in Azerbaijan is also known from the Bronze Age, according to written archaeological sources that have reached us. Many ancient historians and philosophers wrote about carpet masterpieces: Herodotus, Claudius, Xenophon. The magnificence of carpets made of silk, threads of gold and silver is known from the Sasanid era, which occurred in the III-VII centuries, and to the delight of art critics and connoisseurs has been further developed. Carpets were woven with gold and silver threads, and precious stones interwoven into the canvas, which later became traditional in the 16th and 17th centuries. Azerbaijani silk carpets are sung in an original epic „Kitabi Dede Korcud“.

XIII-XIV centuries. are marked by a large number of exports of carpet products of Azerbaijan to many countries of the world. Azerbaijani carpets on the technique of execution are divided into lint-free and fleecy.

Lint-free carpets are attributed to the early period of the development of carpet weaving. Depending on the technique and style, as well as the composition structure, ornamental wealth and color diversity, they are divided into eight unique types: palasas, Jedjems, frets, kilims, shedd, return, zili, sumahs. 7 schools of carpet weaving are known in Azerbaijan by geographical distinction, compositions, production techniques:

Guba carpets are decorated with vegetable, zoomorphic ornamental motifs, executed with the help of geometric patterns.

The Baku ones are softer, full of deep color, original inimitable artistic elements and patterned subtlety. In the drawings geometric ovals, plants and elements predominate. The color range of the Baku carpets for the intermediate spaces was dark blue, red and juicy yellow.

The richness and complexity of the patterned compositions of Shirvan carpets gained their fame in the Middle Ages, they were sung in their masterpieces by European artists.

Special carpet making workshops worked in Ganja. Ganja is the center for the production of high-quality carpets for several centuries. Ganja was proud not only of carpets, colorful and amazing, but also the production of silk and wool.

In the carpets of the Gazakh school, a small amount of color created a harmonious, colorful picture. Their designs in the Middle Ages were glorified by European artists.

Garabagh is famous for its carpets: a rug from 5 carpets, adapted for home interiors. The Karabakh carpet is rich in color and color palette, which captures the fine Karabakh natural beauty.

The background of intermediate places in Azerbaijani carpets has a traditional, from ancient times, red color. In addition to plants, the paints were obtained from insects, for example, red from cochineal.

The carpet-making Tabriz school is the oldest school of Azerbaijan in carpet products. The dawn period was in the XI-XII centuries., And in the XIII-XIV centuries. mastered the artistic feature of the Tabriz miniature school. High level of development falls for the period from the XVI-XVII centuries. Fleecy and lint-free carpets, produced by the Tabriz school, are distinguished by high artistic creativity, colorful harmony and various ornamental ornaments. To see all the facets of this handicraft art, you must order a special tour from the tour operators of Azerbaijan.